Holmes on the Range: A Novel of Bad Choices, Harsh Realities and Life in the Federal Prison System

Demons. We all have them. They take various forms and affect us in different ways. Some are obvious like drugs and alcohol. Loneliness and depression and self-doubt are not so apparent if that is all you’ve known until college.
In Holmes on the Range, Dan Holmes, Esquire wakes up one morning and realizes he is living his childhood dream. Wife, children, houses, cars, jewelry and cash flow from his legal practice are his. What he doesn’t realize is that the demons that haunted him when he was growing up did not disappear as his career blossomed.
Then life threw Dan a typical business-oriented speed-bump that he handled by building it into a mountain he could never scale. Those long silent core emotions led him, with eyes wide open, to risk his profession, his marriage, his community standing and his soul to keep things going. Lie built upon lie, larger thefts compounded smaller ones--time was purchased with ever bigger crimes against the community he served while he ignored his family life. Just live long enough for one more economic upturn and a few good deals to come along--everything will be fine. Or win the lottery. FBI agents came calling first.
After pleading guilty, ex-attorney Dan Holmes entered the federal prison system for a ninety-six month stay not knowing if he could survive in a world he had seen only in the media. Penal rehabilitation turns out to be a life lived with four hundred other minimum security types in an open campus where any inmate can walk off the property. Accountants, lawyers, physicians, drug dealers, stock brokers, priests, the mentally retarded, the mentally ill, odd pranksters, clever scammers, and people more resembling barking dogs than human beings are all around him. The staff people are there in prison too, and everyone has mostly nothing to do, and a lot of time to do it in. Middle school without teachers--a way wicked wild world so few get to know close up.

About the Authors:
Sam Skinner was born and raised in Florida. He graduated from college and began a career in banking where he rose to Vice-President, Construction Loans. Then he changed career paths and worked as Chief Operating Officer for a real estate developer in Virginia. It was then that his life took a turn for the worse. He decided to be loyal to his employer when the employer committed bank fraud to try to secure takeout financing for his upside-down real estate portfolio. Sam did not call 911 and report the felonies as soon as he saw them, which is the letter of the law. His loyalty to an individual he liked and admired trumped his moral compass. When everything collapsed, Sam was indicted and pled guilty when the developer did not stand up and take responsibility for the frauds he alone had committed and authorized.
Dan Holmes grew up in Philadelphia, Pennsylvania and went to law school after graduating college. He worked hard and became successful in his trade and was on his way to enjoying the fruits of his labor. Unfortunately, Dan wasn't prepared for the many trials that life makes you endure and, in his moment of testing, Dan failed miserably. 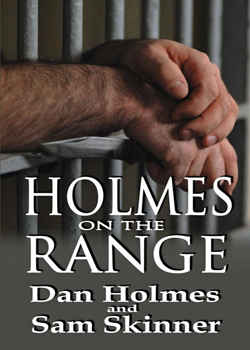 Holmes on the Range: A Novel of Bad Choices, Harsh Realities and Life in the Federal Prison System