Hope of the Spirit

Jacob, Callum and Zane are desperate to rescue Mr. Barnaby from the eternal realm and possible possession by one of the time vampires. That means traveling through a portal once more… something that didn't go all that well the first time.

Unfortunately for Jacob and all of his friends, the only key to Mr. Barnaby's saviour is in the haunted lighthouse far out in the rough waters of Pembroke Bay. A place where legend says those who venture never come back. What's more, not only is the town of Pembroke Eve at stake, but the lives of every person on the planet hang in the balance as the eternals put into place their plan to take over the human realm. Yes, the eternals want power, but they're pissed off as well, having lost hope of taking over the dragon realm, thanks to Jacob and his friends.

Meanwhile, Aloysius and Suzy must hold the fort at home, looking after both the General store and the Food Emporium. After all, a shipment of noodles at a bargain price has just hit town and who else will hold back the crowd in Mr. Barnaby's absence while Jacob, Callum and Zane go rescue him?

Sure, Jacob may be a king and the younger brother of powerful dragon, but can he and those he loves survive long enough in the lighthouse to discover the key they need? Or will they become the next victims of the curse of the lighthouse?

The gang are in for the fight of their lives this time…with unexpected results. 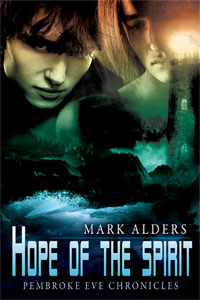 Hope of the Spirit

In the next room I was confronted by the sight of Zane and Callum, lying on the floor, arm in arm and a tangle of legs, kissing. I smiled. My worries, for the briefest moment, melted away. The sight of my two beautiful men showing each other affection always did that to me.

"I see you couldn‘t wait for me then," I said, coming over to them.

Both of them had erections, their foreskins retracted. Soaked in the blue glow, I could see glistening wet patches on Callum‘s stomach, either from Zane‘s pre-cum or the many kisses he would have planted on his skin, or both. What a magnificent sight.

They broke their kiss. Zane said, "Come and join us, Jakey." His words, even though they were what he would have said when he was with us in an intimate way, struck me as odd. I was taken out of the moment I had been caught up in when I had first laid my gaze upon their writhing bodies on the floor.

I hesitated in my advance. "But this isn't the lighthouse…and we‘re not alone here."

Callum let out a chuckle and a deep sigh of relief. "We‘re safe, Jacob. Trust me. Now c'mon, get that beautiful cock of yours over here so you can give me some much needed loving. I so need you and Zane to fuck me hard, and right now, too."

I was stunned. Again, not by what was said. Dirty talk I was used to. I loved it, in fact. But what floored me was why both Callum and Zane would be so nonchalant about this whole situation. Heck, how could they think of making love at a time like this? I‘d only just escaped from the alien in the other room.

In that moment, I realised that the door had slid open and that sound, those footsteps, rang out once more to send fear through my very being. I swallowed hard. Zane and Callum didn‘t seem to care and continued with what they were doing before I entered the room. Callum planted tender kisses all over Zane‘s chest, moving down toward his groin.

I was more than confused. What the fuck was going on? This wasn't like Callum at all. He‘d be scared out of his mind, unable to think about doing anything other than running away, let alone sustaining an erection and about to take Zane‘s cock into his mouth.

"Relax, Jakey," Zane said between gasps. "Let me suck you off while Cals does his thing. Then we can get more down and dirty, just how you like it."

Callum was kissing and licking him where his garland had been tattooed, holding up his cock, ready for whatever he had in mind next, which wasn't hard to figure out. Zane was about to get blown. The sight of Callum lavishing all his attention on Zane made me stir.

Until I heard a purring noise from behind me.

I turned. What I saw drained the blood from every pore and froze me onto the spot.