~Herald angels aren’t allowed love for the daughters of Man.~

Surrounded daily by evidence of mankind’s inhumanity, Nathan finds peace and a ray of brightness only in the purity of a barrista’s smile. Cassie’s warmth, far sweeter than the cup of hot chocolate she sells him each morning, touches even an angel’s heart. Still, they seem fated to be nothing more than customer and shop girl, until, sparked by a simple act of kindness, attraction blooms on a snowy afternoon.

One kiss frees the love in both their souls. But that kiss breaks Nathan’s covenant to guide and succor those for whom he bears a message.

One kiss proclaims their love. There can never be a second. 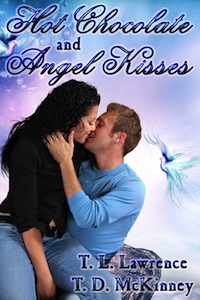 He laid the Bible back in its place and glanced out the window. The young lady from the coffee shop hurried across the street, laden down by a backpack nearly as large as her petite frame. A student then, no doubt spending all her time studying and working, little time to look around at others. Rich red-brown hair tumbled from beneath her cap and onto her shoulders, a pretty frame for her fair face and dark exotic eyes. A lovely example of God's creation.

Hers had been the only smile in the shop, or the only one not accompanied by a long slow perusal of the mortal form he wore. Not that Nathan wasn't occasionally flattered by such. But the woman's smile reminded him that once in awhile people could admire while still being simply nice.

Fair of heart, fair of form…so very fair of form. She turned at the bus stop so he could see her face and his fingertips longed to brush the rich tones of her complexion, to see if it were as creamy silken as it appeared. Ah, to feel that cloud of russet hair curling around him as they lay together, sublime indeed.

Whoa, Nathan. It's not the days when the sons of God took the daughters of men to wife. Knock it off before you need a cold shower.

He made himself pull away from the almost disrespectful thoughts and just enjoyed her smile at another passenger before the bus pulled up and blocked his view of her. Off to class, then. He'd see her tomorrow.

He hoped her day progressed pleasantly and she found the time to notice the soft fall of snow as something more than a hindrance to traffic. Perhaps then she'd feel a small measure of the comfort she brought him.

The chocolate flowed over his tongue, rich sweet delight with just a hint of bitterness. Just the way life should taste.