Hotter the Second Time Around

Rory Aldridge was no saint. Neither was she a slut. But as she rounded 40, she began to think she should have spent less time trying to be the former and more time enjoying being a little of the latter.

She’d married a nice guy, raised two boys and enjoyed writing for one of Southern California’s top design magazines. But nothing she tries ever gets her husband to show any interest in sex. She fills her longing for passion with racy novels and fantasies of a man who wants her and knows how to show it.

So when photographer Pete Hogue starts drifting by her desk with ready compliments, she is a more-than-willing listener. As flattery turns into chemistry, she tries to resist this divorced dad. But from the first time he kisses her, pulling up her leg around his hip unapologetically, she knows she is going to give in.

But had she been so eager for what other women had that she rushed into something that wasn’t what it appeared? Had she finally tasted her long-awaited sexual moment only to find it jerked away by a guy who was looking more like a jerk by the moment? 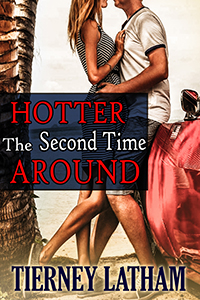 Hotter the Second Time Around

Rory looked over the mock-up pages of the magazine spread on the conference table. The story was a profile of a Spanish Colonial Revival house along the coast, Casa Paradiso, with ten bedrooms, horse stables and an infinity pool overlooking the ocean. All that was missing was a headline for the story. The copy editor had come up short and now most of the magazine’s editorial team stood around the table throwing out ideas.
The photos were gorgeous—Pots of red geraniums flanking teak French doors leading out to a terrace. Purple lantana cascading down a tile-covered outside staircase. Even a shot of a lizard sunning himself on a terra cotta tile floor. Nice touch of whimsy.

“Who took these?” Rory asked no one in particular. “The light is amazing.”

She looked back at the photos and her eye fell on one of the pool, with two chaises next to it. She pictured herself sunning there, with a magazine in hand, of course, and maybe a dog at her feet.

The second chaise oddly disturbed her. Try as she might, Rory had trouble picturing who would be lying there next to her. All she could think was some fantasy man, because she certainly couldn’t picture her husband of eighteen years lying with her there and have it still count as anyone’s idea of paradise. And how, she wondered—because she found herself wondering this more and more—did anyone live with someone else long enough to afford a house like this and still want to lie next to them, perhaps throughout retirement till their dying days, with no one else around besides a fence lizard, and not feel deep inside them that if it was any paradise, it was paradise lost.

She pushed away that thought and imagined stretching out on the chaise in her bathing suit, closing the magazine and drifting off to sleep only to be woken by the young neighbor coming to check on the sprinkler system but instead bewitched by her tanned legs and polished toenails. He doesn’t say a word as he lowers his lean torso over her and covers her mouth in kisses before moving the magazine off her stomach and continuing down to her infinity pool...

Just then someone came into the conference room and Rory looked up into the blue eyes of a man she’d never seen before. Solidly built with salt-and-pepper hair, the man stopped at the table and looked down at the spread. “Shit, that looks good.” The editors chuckled, and the man pushed some of the pages aside to set down a camera that had been slung over his shoulder.

“This is Pete, for those of you who haven’t met him yet,” said her editor. “Comes to us from the L.A. Times.”

What’s an L.A. Times photographer doing here at this Central Coast shelter pub filled with stories on overpriced second homes and faux historic wineries? Rory wondered. But at that moment she was distracted by the new guy rolling up the sleeves of his button-down shirt to his elbows, up over some muscular forearms that looked like they could lug a lot more than camera equipment.

And suddenly the headline for the story popped into her head, and she said it out loud: