by Selena Kitt, B. Crouch

She’s the trophy wife of a trophy hunter.

They used to be high school sweethearts, but that was two decades ago, and times have changed.

Meet Ariana Plano...40 years old, miserable, stuck in a loveless marriage to the worst mistake of her life.

Meet Ray Koski...40 years old, miserable, a lonely butcher who can do nothing but immerse himself in the drudgery of his work.

Once a week during hunting season, she brings her old teenage flame game meat for processing. They do not speak. They rarely make eye contact. Some histories are just too painful.

But this week will be different.

This week—a shocking encounter twenty-two years in the making—will change everything. 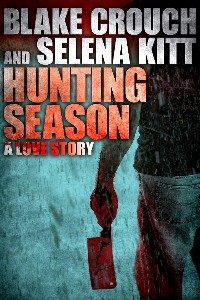 by Selena Kitt, B. Crouch

But in truth, she had to own up to being gobsmacked by Bud in the beginning. This flashy, big-game hunter from Dallas who’d flown up to Ontonagon County in his own Beechcraft to hunt moose in the Porcupines. Ariana’s father, a big-game sportsman himself and proprietor of the region’s premier guide service, had been the one to take Bud up into the hills, and she faulted him for making Bud fall in love with the UP.

Of course, there was a modicum of blame to be laid upon her shoulders as well. She still remembered the flutter in her heart that evening Bud and Daddy had come to the shop with one of Bud’s white-tail kills for meat processing.

Bud had swaggered in with an eighteen karat smile and an accent that made her knees go wobbly.

She was eighteen, a senior in high school.

Cheerleader, B-student, comfortably popular, steady girlfriend of Ray Koski—point guard for the varsity basketball team and a sweet, funny guy who everybody loved.

Bud was thirty-five, already a retired oilman, and standing there smelling of whiskey and musk, radiant with the thrill of the hunt, she couldn’t shake the feeling that her future had just walked in.

That was twenty-two years ago this month.

All day, the radio had been ecstatic with reports that the Berlin Wall had fallen, and now this man from Texas was standing in her shop like a dream.

A day of change for both her and the world, and despite all that happened after, she still to this day couldn’t help but rank it as the most exhilarating moment of her life.

Poor Ray never had a chance.

Because Bud was a hunter and obscenely rich—mainly the latter—Ariana’s father had given the Texan his blessing to marry his daughter before she was even a high school graduate. In return, Bud had made three solemn promises—(1) he would settle down in Ontonagon County; (2) he wouldn’t sleep with Ariana before they were wed; and (3) until the day the Good Lord saw fit to call him home, Bud Plano would treat his little girl like the princess that she was.

At least he’d kept one of them.

Ariana graduated from high school on a cool Friday night in June and was married the following day in a small, outdoor ceremony on the shore of Superior.

For her wedding gift, Bud built them the largest private residence in the UP.

The lifestyle of a midwest queen was a learning process.

To manage a staff of housekeepers and groundskeepers.

And while these were skills helpful and necessary to the requirements of her job, it was only in the second year of marriage and beyond, while most of her friends were thriving at the university in Marquette, when she became acquainted with the most important lessons of all...

Not asking “Where are you going?” or “When will you be back?”

Not ever serving leftovers.

Not ever initiating a new topic of conversation at a dinner party where Bud’s friends were in attendance.

Not ever inviting her friends to visit without first securing clearance from Bud.

Not ever refusing sex.

Or going out without first asking permission and giving Bud an accurate estimate of when she would return.

Or miscarrying a second time.

Or leaving the house with fresh bruises.

Or calling the police at two-thirty in the morning when you’ve locked yourself in the bathroom because your husband has threatened to kill you.

Or bringing Bud anything less than an ice-cold beer in his favorite pint glass.

Or miscarrying a third.

Or loaning money—Bud’s fucking money—to a friend on the brink of a winter eviction.

Or miscarrying a fourth.

Or ever acting like a cold and distant bitch.