Sian and Andy have good lives, loyal friends, a beautiful home and a loving family. To everyone else, they are the perfect couple, the doting husband, and the successful wife. But every family has secrets, and Sian and Andy’s are about to realise that nothing stays hidden forever. Some secrets are just dying to get out.

At what point does a career become more important than your life, than the one you love, than your own sanity? Sian is about to find out because she keeps seeing things, dark monstrous shapes that hide in her bed, that lurk in every corner, and no-one will believe her. Even her own mother thinks she has lost her mind. To make matters worse, Andy thinks her hallucinations are caused by guilt, a guilt that is slowly devouring their perfect relationship.

After a blazing row, Sian is left alone in a house that feels hostile and dangerous. As darkness falls, she must face her guilt in the form of a horror more profound and more terrifying than her worst nightmares.

Disclaimer: This contains sensitive content and should be avoided if you are easily offended. 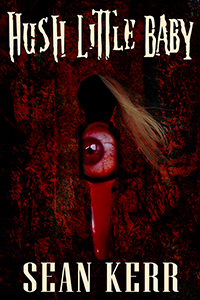 The pink glow of her bedroom looked so inviting, but the door next to her room, her mummy’s room, stood open, an enticing rectangle of black that she could not resist. She chewed on her fingernail nervously as she reached into the room with her other hand, groping in the dark until her fingers found the switch and flicked it on. The black rectangle of the doorway exploded in a warm, orange tinged glow as the light bounced off the terracotta painted walls.

Just inside the door sat a large pine bed. Straight in front of her, almost filling the space above the old-fashioned metal fireplace hung a chunky pine framed mirror, the entire bedroom reflected in its glassy surface. She could see her own tiny form standing in the doorway, and she swayed slightly from side-to-side, pleased with the effect of her swishing nightdress. She really was a Princess, she thought to herself as she coiled her long blonde locks around her tiny fingers.

She plunged her hands under the bed and pulled out a thick black photograph album, telling herself that mummy wouldn’t mind just that once. The book felt tremendously heavy in her tiny hands. She climbed onto the thick mattress, the album filling her tiny lap and as she opened the leather-effect binding, it creaked with age, revealing the pictures inside with reluctance.

Mummy looked so pretty and so young as she sat on a beach with her own mummy and daddy. Even back then she wore her trademark hair style, the tight blonde bob framing her elven face. The label at the top of the page read Sian with Mum in Rio. Another picture revealed a slightly older mummy sitting with her mother. The older woman had a cigarette in one hand and a tall glass in the other. Beyond them lay a beach, a sunny expanse of aqua blue sea and sky. The next picture, taken in the same spot, depicted another figure with them, a handsome dark-haired waiter snuggling up to the older woman pretending to kiss her cheek.

She turned the page, and her little blue eyes lit up when she saw the mosaic of pictures awaiting her of her mummy and daddy. The label read Sian and Andy in college. The pictures displayed Sian in various states of sobriety, images of Sian and Andy looking so happy and so carefree. The little Princess turned another page, and happy faces grinned up from the photographs... graduation photos, a portrait of Sian and Andy standing side-by-side dressed in long black robes clutching their certificates. Sian’s hair was now a deep, raven black.

Little fingers eagerly turned the page. Our first house with photos of a jubilant Sian and Andy standing before their house pointing toward the front door, house keys dangling from their clasped hands.

The page turned again. One large photo glowed from the page, a picture of Sian standing before a large department store, the biggest smile plastered across her beautiful face. She looked so smart in her tailored black pinstripe suit. Her trademark black bob paired neatly with her favourite lip colour, a bright cherry red that seemed to jump from her gloriously happy face. Printed neatly beneath the portrait, written in gold, the words I got the job!

The last page felt funny beneath her little fingers, brittle and insubstantial somehow. The picture looked old, faded, Sian and Andy’s features almost transparent like ghosts. Andy had his hand on Sian’s swollen stomach, a huge grin plastered across his features, but Sian’s face looked strange, almost as though her mouth had melted away.