I Contadini (The Peasants): An Immigrant Italian Family Takes on the Mafia

A story of passion, suspense and violence.
Ettore DiStephano, an immigrant Italian stonemason, learns that his daughter, Maria, has been found raped and murdered. He calls home his children: Vincent, a judge; Michael, a surgeon; Anthony, a priest; Rose, wife of a business tycoon; Paul, an army colonel; and wild, deadly, Dominic, an engineer with wanderlust.
Disdaining American justice, Ettore insists that the family find the killer.
Jim, the tycoon son-in-law, joins the search. Then his wealthy niece, Bonny, a spinster anthropologist, falls madly in love with Dominic, and demands to help.
Soon, one suspect stands out. Tracking him down takes the family to foreign countries, where guns explode and men die. Then, as the action thickens, they find that beneath the veneer of their professional exteriors is the pelt of their father, a contadino, and that his mission is correct.
When the confrontation gets out of hand, both sides mass their strength for the inevitable showdown.

About the Author:
Lester Taube was born of Russian and Lithuanian immigrants in Trenton, New Jersey. He began soldiering in his teens in a National Guard horse artillery regiment, where in four years he rose in grade from private to the exalted rank of private first class. In World War II, he became an infantry officer. His first operation was on the Bismarck Archipelago, where his most dangerous opponents were malaria and sand fleas. His regiment was next attached to the 3rd Marine Division for the Iwo Jima operation, then he and 18 other soft headed volunteers fought on Okinawa, the last battle of the war. Recuperating from wounds and malaria, he left the army to run a 400 employee electronic company in California, a 450 employee paper stock company in Pennsylvania, then moved to Canada to open a logging and pulpwood cutting operation. Recalled to service during the Korean police action, he served as an advisor to the Turkish army, then as an intelligence officer and company commander in Korea.
During the Vietnam period, he went on duty in France and Germany as a general staff officer working in intelligence and war plans, and even had a stint as Chief of Operations of the U.S. Army in Europe. While in France, he opened a chain of coin operated laundries, which became the largest in Europe. Prior to retirement as a full colonel, he moved to a small village in Austria, and kept a boat for five years on the Côte d’Azur.
During this period in Europe, he wrote four fiction novels, which were published in hardcover by W.H. Allen of London, paperback copies were published by a subsidiary, and rights were sold to a number of foreign countries. All four novels were optioned for motion pictures and two were sold. He stopped writing because of his time consuming jobs and the raising of a family. He has four children, all born in different countries.
After 13 years in Europe, he returned home, where he worked as an economic development specialist for the State of New Jersey until his final retirement. 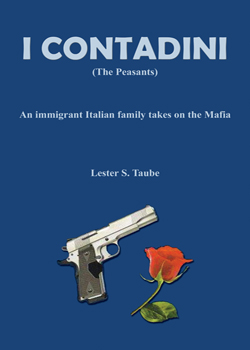 I Contadini (The Peasants): An Immigrant Italian Family Takes on the Mafia