If I Told You

Have you ever looked at a face you thought you knew as well as your own and realised, suddenly, that you couldn’t look away? Or looked into the eyes of someone brand new and thought Oh, there you are? Love can hit you like a fist or comfort you like a caressing hand, but it is never weak, or placid, and in the darkest moments there is beauty to be found, in love, in loss, in living connected to another person, or aching for a connection that’s been lost.

If I Told You has 16 stories of love, sex, heartache, and laughter; filled with firsts and lasts, and all the agony and ecstasy in between.

But the naughty bits are up for grabs. 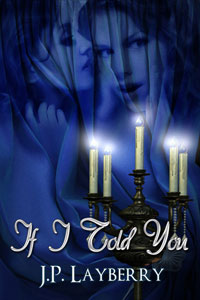 If I Told You

A bark of laughter escaped her before she remembered to be offended. “That’s what you’re thinking while you’re kissing my neck?” She couldn’t quite keep the smile off her face, but took comfort in the fact that he clearly wasn’t looking at her face.

She shook her head and leaned back against him. “I’m not the best person to judge.”

She rolled her eyes and took a deep breath, letting it out slowly. She let her gaze linger on the brunette’s ass, feeling mildly ridiculous. “Well, it certainly is…round.”

“Round?” he said incredulously. “Round is not the measure of a nice ass.”

She smiled and pushed herself back against him. “So what is?”

She rolled her eyes again, and smiled, knowing that she had married a schmuck. He kissed her neck again, tasting it with his tongue.

She tilted her head to the side and continued her contemplation of the woman’s posterior. She tried to see it the way he obviously did. She let herself appreciate the woman’s skin, very tanned and smooth looking. She wondered briefly if she used a sunless tanner and then pushed the thought away.

She watched as the blonde reached down over her back and caressed it, her hand sliding slowly across it, from one side to the other, lingering briefly where the two halves met.

She gasped, feeling a pang of excitement in her nether regions that almost hurt her with its intensity. She squirmed against Dave for a second before letting out a long shaky breath and trying to regain her composure.

She felt him grinning against her neck.

He kissed her ear and whispered, “I told you it was a nice ass.”

She smiled and turned her head, kissing him for a moment before looking back out the window. The blonde had pulled her partner up for a long slow kiss. One of her arms went around the brunette’s shoulders, as the other one slowly caressed her back for a long moment before wrapping around her waist and pulling her very close.

“Who could blame them?”

“Mmm,” she breathed in agreement.

Dave’s arms were around her waist, wrapping her in strength and warmth. As always, she savoured the way he could make her feel completely safe and secure. With a quick movement, he pulled her t-shirt off over her head.

“Dave!” She crossed her arms in front of her. “Jesus!” Her heart pounded against her ribs. She could hear its staggering rhythm. She felt dizzy.

“They can’t see you. They aren’t even looking…see?”

She took a few deep breaths and looked back over there.

The women were still oblivious to anything but each other. Their kiss had grown more passionate, their bodies pressed close together as their hands explored.

Dave ran his hands over her arms until she relaxed and let him pull them away. As her heart steadied back into something resembling its normal rhythm, she found herself grinning. It was surprisingly liberating to be standing there like that—her breasts bared in front of the open window. She glanced down at them and felt a nervous flutter in her stomach. The moon was illuminating them somewhat. She saw his hands come around her, cupping them, squeezing them…she swallowed hard.

“Look at them, honey…watch them.”