In Search of Flesh

Raya was brought from the darkness and given an almost human body. Alard has no body. He was born as soul alone and roams longing for human things he can't touch or feel. An ancient vampire, Conrad, promises to help him, to give him flesh. With vampire hunters coming, Alard only hopes they all live long enough to make his dreams of being with Raya come true. 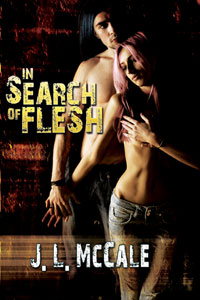 In Search of Flesh

Raya touched her naked skin, tracing the pink vine like marks on her thighs. She lay on the bed, naked, enjoying her new appearance. Her skin was very white with pink lines running the length of her in a strange pattern that was really no pattern at all. It reminded her of chaos, of nature.

No one seeing her now would recognize her as the spider creature that had helped Gershon escape Veris. She appeared much like a Goth Barbie with her pink and white hair and strange tattoo looking marks. Best of all, sunlight no longer hurt her. She could walk in the light and not fear the sun.

A strange chill filled the bedroom where she rested. It had to be Alard. Since her rebirth to something almost human, he spied on her. On occasion she caught his outline when she bathed. The steam would rise and mark his silhouette. Twice this week she could have sworn he had been in her bed. Each time she pretended not to notice and when she finally acknowledged him, he kept silent. It was a fun game they shared.

"Alard, what are you doing?"

He failed to answer.

She chose to explore this body further and torment the ghost-like man in the process. Raya spread her legs wide, touching the slit that grew moist whenever she knew Alard was near. It felt good. This body was far more sensitive than her old one. She silently thanked the vampire that stuck the silver coin in her leg and brought on this transformation.

The lips around her slit were bright pink with a bud in the center. She liked touching that part best, but she never touched it first. She enjoyed starting in other places until her skin tingled. There was more to her odd indulgence. Touching herself was never enough. She preferred to imagine Alard doing the touching.