In Sunshine or In Shadow

A Gambler With a Thirst for Revenge

After a lifetime in exile, stakes are high for one-time gambler Rory O'Brien as he returns to the village of Ballycashel. Has he come back to destroy the village that haunts his past, or to atone for the sins of his father? When drawn into the lives and loves of his newly-acquired tenants, his thirst for vengeance is quenched by an unexpected yearning for peaceand love. Can Rory overcome the ghosts of his past, or will old enemies destroy the new life he's come to love?

A Valiant Survivor of Famine and Tyranny

Siobhn Desmond will do anything to keep the tattered remains of her family alive, even if it means working for the new landlorda darkly handsome stranger with secrets in his eyes and pain in his smile. As she watches her village return to life and begin to thrive under Rory's care, she comes to understand his true nature and soon finds herself falling under his dangerously sensual spell.

As danger ignites all around them, Rory and Siobhn fight to right the wrongs of the pastand protect their newfound love...

In Sunshine or In Shadow. 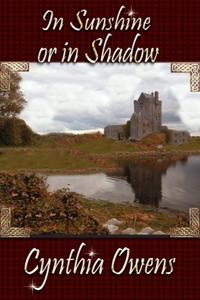 In Sunshine or In Shadow

If you adore the stormy heroes of "Wuthering Heights" and "Jane Eyre" (and who doesn't?) you'll be entranced by Cynthia Owens' passionate story of Ireland after the Great Famine, and David Burke - a man from America with a hidden past and a secret name. Only one woman, the fiery, luscious Siobhan, can unlock the bonds that imprison him. Highly recommended for those who love classic romance and an action-packed story.

Siobhan Desmond is a simple woman with simple hopes and dreams for her future. Born in Ireland she spends her days eking out a living as best she can and mourning the loss of her husband and her brother. What she wishes for the most is peace, for herself and those around her.
Rory O'Brien is also in search of peace. Returning to the village of his birth, he plans to right the past wrongs and forget the past. He hides his identity under an assumed name hoping that no one will recognize the boy he was in the man he has become.
Neither Rory nor Siobhan are searching for love, but a chance meeting brings them together. Old ghosts rise to hunt them both and secrets reveled will stress the bonds of their love. Will Rory and Siobhan be able to lay the past to rest and move on? Or will the shadows rise and claim them both?
The characters are nicely well rounded and classically Irish.  This was a classic romance told in a sweetly old fashioned way.

It was wrong. It was dangerous. It was foolhardy. Yet Rory couldn't resist. He reached out with his right hand and gently cupped her cheek. Unhesitatingly, she leaned her face into his palm, not even seeming to notice the scars. Tenderness welled up in him, and he reached for her.

Their lips met in a frantic kiss, as if for the last time. She made a tiny, helpless sound, and then her arms went around his waist, pulling him ever closer. A harsh growl escaped him, and he buried his hands in her hair.

The softness of those red-gold curls was such tender ecstasy it nearly made him groan out loud. Surely he'd never felt anything so sensual. And the taste of her lips was like nectar from the gods. His mouth skated over the curve of her cheek, tasted the salt of her tears, and slid down the side of her neck.

"Siobhn," he muttered, his breath coming in harsh gasps as he nuzzled the hollow at the base of her throat. "Ah, mo chroi, don't leave me. Stay. Stay with me."

A small, broken sob burst from her, but she neither pulled away nor gave him the answer he sought. Instead her hands moved restlessly up and down his back. He brought his mouth back to hers, for he couldn't get enough of its sweetness. He wanted her, needed her nearer. His arms strained in a desperate effort to pull her closer still. It had been so long since he'd allowed himself any contact with another human being, and her softness, the eagerness of her response, nearly drove him mad.

He brought his hand back to her cheek, unthinking, and she caught it in one of hers, brought it to her lips. As her mouth moved over the scars, her gaze never wavering from his, he felt a profound emotion he couldn't name.

Those scars were the badges of Rory's past, evidence of his sins. Yet now Siobhn was embracing them, healing them, and in so doing, she made him feel almost whole again.

Could the curse be broken?