In the Lion's Mouth

Stalked by a lecherous tyrant, Owen and Grace flee their beloved Ireland in pursuit of freedom and happiness.

With no ship departures until spring, Owen obtains work with a traveling blacksmith and leaves Grace in Liverpool. While there, she is accosted by their nemesis, Lord Rushmount, and barely escapes with her life.

As Grace and Owen continue to cross paths with Rushmount, she is challenged with hiding her experience in Liverpool.  For once Owen discovers the truth, will their love remain strong? Or will the truth destroy their shining future? 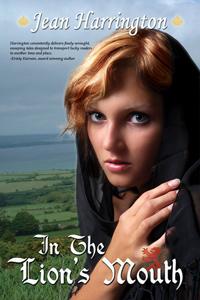 In the Lion's Mouth

Impressive!  Harrington delights with an evocative tale sure to please. A strong heroine, intense emotion, and a vivid setting make In the Lion's Mouth a breathtaking romance. Well done!

At first, in her haste, Grace didn't hear the horse coming up behind her until the sound of hooves striking the cobbles caught her alarmed attention. She glanced back over her shoulder. A black stallion was bearing down, racing along as swift as if the alley were a highway.

Where to go! No doorway ahead, no niche, no depression in a wall. She'd be crushed under those powerful legs. Could the rider not see her?

She pressed against a soot-smeared wall, the basket swaying on her arm. If the horse caught at the basket in passing, she'd be pulled into harm's way, but before she could stoop to place it at her feet, the stallion was upon her, so close that even in the dim light, she could see the whites of its eyes and the flecks of sweat beading its coat. She could die under those hooves! But of a sudden, the horse careened to a halt, the savage hand of the rider sending its forelegs flailing the air before it skidded to a stop.

In his aristocrat's formal wig and clothing, he sat his saddle with ease, on his face the look of a sleek cat that had cornered its mouse.

She dropped the basket and began to run. In an instant, the stallion blocked the alley. Ross Rushmount leaned down, and with a single arm, pulled her up onto the saddle in front of him where he held her like a carving in a vise. "Don't struggle. You're not going anywhere without me."

She pulled in a deep breath, ready to expel it in a scream. His arm hardened. "If you cry out, I'll kill you."