After losing his life partner, the young cowboy Sam Stewart lived a protected life behind the high walls and the fortress he called his home. A band of Indians came visiting one night to make peace and trade with the westerners. However, Sam had more on his mind than trading when he approached the half dressed savage Indian.

Before he knew it, he had walked across the main plaza and out of the main gates to within a few feet of the Indian standing guard. Six feet of lean muscled man stared back. He was dark skinned, his chest left half bare by the beaded vest he wore, exposing the lightly matted thatch of fur on his chest. He couldnt refuse the urge to run his fingers over the other mans chest, was there. He felt the desire to press up against him, and do much more than touch him. He felt an odd thrill go through his stomach and press lower to his groin.

The sight made him very aware of the Indian as a man. It wasnt like he hadnt seen a man before. He was no virgin, but not since he had shared her bed with her husband had he seen another mans naked chest. Still, the sight made him uncomfortably warm and aroused. He adjusted his bright red coat, loosening it around his shoulders.

Hello there. Sam smiled warmly at the Indian. He was unsure how much English the savage spoke. If any at all. He hoped his actions were enough for him to know that he came as a friend. I saw you standing here all by yourself and thought you could use some warming up. I brought you some warm apple cider because I noticed you werent drinking. He offered a mug as he held up the jug of cider.
The Indian frowned at him and he realized he was babbling. Worse, he was babbling in English, which the Indian probably didnt comprehend. He sighed in disappointment.

Oh, you must not understand me. Do you want a drink? Sam pretended to drink so the Indian would get the idea.

The Indians dark eyes sparkled in silent amusement. I speak English. I am just surprised to see a man without the protection of all the other soldiers here. All the others hide behind the walls or come out in herds. 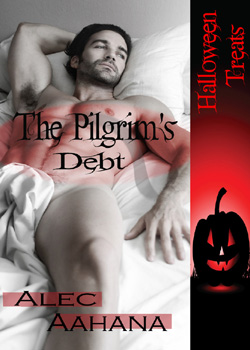