Sandra is a telepath from a long line of female telepaths, and she has just met the man of her dreams. Unfortunately, she has to put that dream on hold when her sister becomes ill. Sandra is the only person who can reach into Carol's mind and relieve the pain of stunted telepathic growth.

But when the healing process takes much longer than anticipated, Sandra discovers her own pain. Will the extended separation from Gray and the unrevealed secret of her gift destroy their relationship before it even has a chance to blossom? 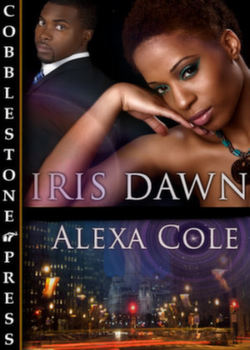 Startled out of her concentration on the book, Sandra glanced up and found herself quickly stifling a tiny gasp. The body that greeted her eyes was just as sensual as the voice. Velvety chocolate skin. Burgundy pullover and gray slacks. Hazel eyes calm, knowing, but too full of laughter to be called wise.

Wrenching herself back from the momentary lapse into Candy Land, Sandra pursed her lips as she responded with one lifted eyebrow: “Say yes? But I don't even know you. You could be some maniac who'll chop me up into little pieces and stuff me down the garbage disposal.”

“Ah, but I know you,” he responded with unshakeable poise. “I've noticed you in this bookstore for weeks now. You read science fiction and occasionally dabble in the occult section. A woman with imagination as well as great beauty. Please say yes.”

Those eyes. That's what did it. For reassurance, she used her rare talent to probe the edges of his mind ever so slightly. Yep, the brother's for real, she thought with relief and a smile.

A little while later, Sandra emerged from the South Street bookstore with a definite bounce in her step and Gray's phone number in her cell phone. She paused, trying to decide what to do next. Two seconds was about all it took for her to conclude that the next couple of hours should be dedicated to beautification—of her, that is, not the Philadelphia streets. “A girl's got to look her best to feel her best,” was her motto. For the second time that morning, she dug her cell phone out of her pocketbook. Using speed dial, she paced the sidewalk as she waited for her best friend to pick up.

A few rings later, Sandra heard, “Talk to me, girl.”

“Laundry. Why? You have something more exciting to offer? Not that it gets much more mundane than laundry,” Marsha replied with an overly dramatic sigh.

Sandra laughed. “Cool. Meet me at 16th and Walnut in fifteen minutes.”

“I'm at 5th and South right outside Books That Bind. The 'why' is if I don't tell somebody about this gorgeous man I just met, I will literally scream.”

“Manicure and pedicure. Lola's Nail Emporium. My treat. Got to look right for tonight. Ooh, that rhymed. I must be on fire today!”

“Yeah, right.” Marsha snickered. “But ya know I am not one to pass up a free beauty treatment, so I'll see you in a few. Bye.”

At the salon, the two friends spent long minutes debating the pros and cons of various shades of nail polish, picking up and putting down one after another of the dozens of bottles lined up on the tiny shelves affixed to one wall. They meticulously considered each color's name as if the secret to lifelong happiness were held within. Sandra finally decided on a pale pink called Spun Sugar for her fingernails and Intoxicating Fuchsia for her toes. Marsha opted for a deep burgundy, Devilish Delight, for both fingers and toes, a shade they both agreed played well against her deep-cinnamon coloring.

Shoes and socks off, they took their seats on their temporary thrones: behemoth pedicure chairs bolted down side by side. Each of the pedicurists turned on the whirlpool jets, and hot, scented water swirled soothingly around their feet. As they luxuriated in the warmth, Marsha turned to Sandra and said, “Okay, I've waited patiently till we're nice and comfy like you wanted. Time to spill it, lady.”

With a somewhat embarrassed giggle, Sandra proceeded to explain. “He makes me feel unsettled, but in a good way. Like any moment something terrifically wonderful and new is going to take hold of my life. And my oh my, he is too fine on top of it. You should see how he was put together for just running around on a Saturday morning. I know I'm usually so cynical. But this time…”

“All right, that means just one thing. You did your whammy number, didn't you?” Marsha asked accusingly.

Sandra bit her lip and didn't say a word.

“No, no, no,” Marsha groaned. Glancing at the pedicurists sitting on low stools scrubbing and smoothing their feet, Marsha lowered her voice to a fierce whisper. “You know that never ends up in a good place. Folks aren't ready for mind-readers, not even when they're as sweet and perky as you. Start that mess with that man, and you're gonna scare him away. Listen to me, Sandra. Need I remind you of that fiasco with Richard? Did he even stop to open the door when he ran out of your apartment screaming, or did he just bust right through it like some crazed cartoon character? And as for Barry, don't even wanna go there. Try to play this one the way the rest of us mere mortals have to: no special talent; no peeking at what's really going on in his head. I'm beggin' you, leave the Deanna Troi crap for Star Trek.”

“I know you're right,” Sandra said, sighing and staring at her hands clenched in her lap. “But he feels so different. And I need to know it's not just wishful thinking on my part. I am so tired of lousy relationships. I promise I'll be careful. He won't suspect a thing. Besides, I have to go in to work for a little while tomorrow to gear up for Monday, so you'll be happy to know I won't have a whole lotta time for gettin' into trouble.”

“Humph, don't give me that. I happen to remember you never go in till the afternoon when your all-consuming job requires a weekend appearance,” Marsha replied knowingly. “That leaves plenty of time for whatever. Just call me tomorrow and give me the rundown on the entire evening.”

“Done,” Sandra promised her friend with a smile. “And by the way, Deanna's an empath, not a full telepath.” Marsha just gave Sandra a flat, hard stare that ended with Sandra rolling her eyes and both of them tittering like adolescent schoolgirls.