Immediately on the heels of caring for her terminally ill and troublesome father in England at Christmastime, Penny Stanley receives word that her sister, Millie, estranged from Penny’s dysfunctional family for a decade, is terminally ill and returning to a remote village in the Galician region of northwestern Spain, with no known support other than Penny. Answering the call with considerable trepidation, Penny finds not only Christmas in Galicia but family, as well. This story is both an uplifting inspiration for Christmas reading and a testimonial to the values and welcoming nature of the people of Galicia. 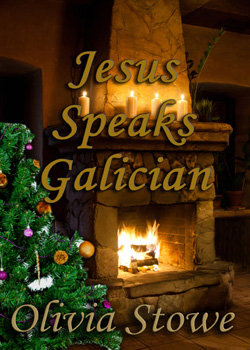 Xesús pulled up in front of a stone cottage that looked like a ruin and that was so close to the road that the small Fiat Xesús was driving barely had room to park between the road and the rock wall. A door opened, and light spilled out onto the Fiat before it was stifled by the figure of a heavyset, elderly woman.

“Dores. From the village. She has been sitting with Senora de Peres,” Xesús explained.

And so it began. Millie had already been sent home from the hospital to die. Yet another ordeal of vigilance to the end for Penny—her last living relative, and yet another one who she had not been close to in life. She hauled herself out of the Fiat and reached for her suitcase, but Xesús was faster than she was at hefting it. The village woman, Dores, gave her a stiff, “Hola. Buenas,” and an “it’s about time you got here” look as she stood aside for Penny to enter the cottage.

The two women had barely acknowledged each other at the door before Dores had turned to return to the sick room and Penny’s attention had been arrested by seeing a decorated Christmas tree beside a fireplace in which a fire had been laid. She almost cried. She hadn’t had time to even think about decorating a tree before she’d left England.

Seeing where her gaze was turned, Xesús gently said, “Christmas trees are important back in England. We thought—”

“Yes, yes, thank you, Xesús. It’s lovely.” And indeed it was. Already the heaviness that had been weighing her down for what it seemed like years was lifting. “Now, maybe I should see my sister,” she said, pulling herself back into reality.