Andrew has had the time of his life at GRL. He even got to meet his idol, but as a result of his outrageous flirting, he’s late leaving the event.

Unfamiliar with the roads of Colorado, Andrew takes a shortcut towards Thornton, following the directions of a sign onto a long dusty road. But the night has other plans for Andrew, and as his car breaks down on an isolated hill, he’s haunted by a terrifying voice.

Do it for Robin, the ghostly voice chants, but as a cute stranger comes to his rescue and lends him a helping hand, Andrew gets more than he bargained for. 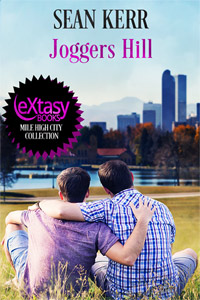 The drive seemed to take forever, and Andrew was already running late. The manager at the Thornton Inn would wonder where the hell he was. GRL wrapped up hours ago, and he should have arrived at the hotel by eight that evening, yet there he was, still driving at ten o’clock at night.

He had no one to blame but himself. That would teach him to flirt. Andrew just could not help himself. His idol, there in the flesh, his inspiration for his own fledgeling literary career, and Andrew just had to get close to him, breathe the same air as him, maybe even hug him. C. A. Dena, the man who wrote the hottest man on man paranormal fiction on the scene. Who could forget King Dong, and The Creature Who Went Deep. Classics. Andrew spent over an hour grilling the poor man long after the stalls had started to pack up. It worked though, and Andrew patted his phone which sat on the driver’s seat next to him. There, stored within the little computers vast memory, sat the number of his idol, complete with a selfie with him and the dashing man himself.

Damn it. Andrew decided that America was just too bloody big. All the roads looked exactly the same, especially in the dark, and as for driving on the opposite side of the road, well, he would never get used to that.

Mist rose out of the road to swirl around his Camaro as it growled through the night. The headlights illuminated the mist before the car so that it looked like a spaceship floating across the tarmac. A sign just ahead reared out of the darkness, and Andrew sat forward in the driver’s seat to squint ahead at it. It pointed towards a smaller road just off the 104th, with big yellow words that declared Thornton this way. With a screech of tires, Andrew turned the car onto the dusty road.

The tarmac disintegrated into dirt, and the noise of the tires trying to grip the loose surface made Andrew wince. Being careful not to take his gaze from the windshield and the murky view ahead, he reached down into the compartment built into the driver’s door and pulled out his printed AAA directions.

Strange. The instructions clearly stated to continue along Riverdale Road, they said nothing about a turn-off. Andrew threw the sheet of paper onto the passenger seat in frustration.

“Well, the sign clearly said Thornton, and that’s where I want to go, so fuck it.”

Andrew flicked on the radio, and Dolly Parton wailed out of the little speakers set into the doors. He grinned to himself when he heard the words of I will Always Love You whine through the speakers. It was one of his favourite songs.

“You go, Dolly, that’s how you do it. Whitney never got it right!”

The car lurched. The headlights flickered, and the radio crackled. For a moment, Andrew gripped the wheel in disbelief as it felt like the power drained from the Camaro.

Dolly Parton’s sweeter than pie voice warbled loud and clear from the speakers once more, and the headlights flickered and burst into life to illuminate the mist ahead. The car scythed through the ethereal wall like a double-barrelled laser.

How quickly the night seemed to swallow the car around him as he sped along the dusty road. Twisted Cottonwood trees writhed out of the fog to hover above the mist, monstrous sentinels that punctuated the edges of the road with petrified regularity. Time and nature transformed the gnarled trees into black spectres, and it made Andrew shiver to see all their branches pointing in the same direction, trapped in some terrible perpetual storm. The trees seemed to bow to the car as it sped past, and although Andrew knew it to be a trick of the light, it chilled him all the same.

The radio lost its signal, drowning Dolly with a high-pitched squeal that made Andrew jump. He reached forward and was about to switch it off when a voice whispered through the speakers.

Andrew’s fingers hovered over the off switch. The voice sounded so strange, a small, desperate plea that to Andrew, conveyed more pain than he ever thought possible.

“Robin!” The voice screamed out of the speakers, a terrible, agonised sound that filled the interior of the car with cold fear.

The car swerved, the steering wheel spinning wildly out of control in Andrew’s sweaty hands. He desperately tried to regain control, but his sweaty palms slid uselessly across the leather-bound wheel. With a cry of horror, Andrew’s feet shot forward, and his hand pulled on the brake, sending the car into a frenzied, screeching whirl as it plummeted through the mist.

The world diminished into silence. The headlights blinked out. The radio stuttered into silence. Darkness swallowed the Camaro, leaving Andrew breathless in the darkness.