Seattle student nurse Jackie Forrest knows she doesn’t have much experience with the opposite sex. So she’s not sure how to respond when the sophisticated new man in her life claims he just wants to be friends. Against her better judgment she soon finds herself falling for her new friend, a man she knows is way out of her league.

Sam Maxwell, a former nightclub owner, has plenty of experience, especially with women. The last thing he wants is another one. He’s so busy reinventing himself after taking over the family business he doesn’t realize he’s lonely until he meets Jackie. She’s not his type, but in the grounded young nurse he discovers admirable courage and stability that bring him to terms with the ghosts of his past.

What can inexperienced, hardworking Jackie offer Sam to make him turn his back on the glamour and excitement of his old lifestyle and learn to love again? 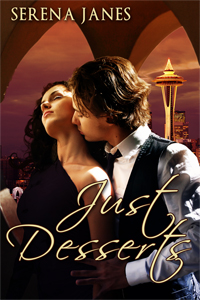 As she slid into a chair opposite Sam in the restaurant, Jackie found herself more than a little uncomfortable. He didn’t seem to notice that most of the other patrons were women, and a good number of them were staring at him. She didn’t blame them. He was the most attractive man she’d ever shared a table with.

But he didn’t seem very happy to be in her company. She decided she should get through the meal as quickly as possible and ask him to take her home. It seemed the best thing, for both of them.

“I’ll just have coffee and whole wheat toast, please,” she told the waitress.

Sam hadn’t bothered to look at the menu. “No you won’t,” he informed Jackie, now looking at her directly for the first time. “They don’t serve toast here. Only homemade biscuits. We’ll both have the Number Four and coffee, please,” he said to the waitress, who was smiling at him a little too hard. “And two glasses of orange juice. Large ones.”

He spoke quickly, authoritatively, but not rudely. The waitress smiled some more, nodded, and moved off. Jackie was dumbfounded.

How dare he! No one had ordered for her since she was six.

“Surely, as a nurse, you know the importance of a good breakfast to set you up for the rest of the day. You’ll thank me for it later,” he assured her, looking her squarely in the eye.

She was speechless, partly out of anger, and partly out of some other emotion she couldn’t quite identify. Part excitement, part astonishment—part pleasure, too. A pleasure she couldn’t deny. All of a sudden, despite everything else she was feeling, she really wanted this man to like her.

Now that she could see him properly, she looked into his gray eyes. They were regarding her with amusement. But they seemed sad to her. The rest of his face was expressionless.

Then she looked at his mouth, undoubtedly his best feature. Exceptionally well-formed lips gave his face a sensual look. They were those kissable lips that would always draw women’s glances the moment he walked into a room, Jackie knew. Even the waitress, a woman in her fifties, couldn’t keep her eyes off them.

His other features were regular, his cheeks smooth and freshly shaved. Yes, it was definitely a handsome face, with nice eyes and a pair of outrageously desirable lips. Rumors of his reputation crowded into Jackie’s mind.

A ladies’ man. Girls, women, lots of them. And he’d never married any of them. Why?

The friendly waitress set their coffee and juice on the table and Jackie stirred cream into her mug, longing for Sam to say something. But all he did was add cream to his own coffee and begin to drink it.

He obviously didn’t appreciate the necessity of making small talk. She began to squirm in her chair, the silence making her feel self-conscious.

This is silly. Say something. He won’t.

“Um, my aunt tells me you’re in the greenhouse business. How do you like it?”

“Do you have any plans for expansion?”

“What exactly do you grow in those greenhouses?”

He looked at her and smiled for the first time. “Yeah. Chrysanthemums. Cyclamen. Seasonal stuff, too. Most people don’t know the difference between cut and pot flowers.”

His smile caught her off guard.

God—what a charmer! Turn that smile onto any woman and she’ll fall helpless on her back. I see now what Marsha meant when she said he was irresistible.

“Well, I don’t really know much. But I do love flowers.”

She thought of the wilting bouquet of chrysanthemums in a vase on her dining table. She couldn’t afford to replace them until the end of the month.

Breakfast arrived, interrupting their awkward exchange, and as she ate Jackie watched him. Although their chit-chat had broken the ice, she was still nervous. He didn’t offer to speak at all, and her attempts to draw him out were met with one or two-syllable replies as he focused on his plate.

So she concentrated on her own food, enjoying the over-sized breakfast of scrambled eggs, crisp bacon, and fried potatoes, even though she rarely ate processed meats and tried to avoid fried food. Just like she tried to avoid sweets. The biscuits were heavenly, she thought.

Of all the subjects Jackie studied in her nursing program, nutrition was the most interesting to her. It was a no-brainer that people are what they eat. So she’d resolved to eat only healthy, nutritious food that was as natural and fresh as possible. That meant no more chips, pop, processed meats—and no more refined sugar. This resolution had made working in a bakery a tricky business. But since she’d begun her practicum she’d given up the job. There just weren’t enough hours in the day. She still missed her pastry treats, but she had her bakery dreams for compensation.

This breakfast tasted better than anything she’d eaten in months.

“That was very good. Thank you,” she said as she demurely blotted her lips with a napkin.

“You ate it all, didn’t you? You must have needed it,” Sam observed dryly.

Fortified by the food, Jackie made one more attempt at conversation.

“We’ve met before, you know?” she offered.

“I was twelve, and you must have been just finishing high school. I was in awe of you. My parents were visiting Marsha when she was house-sitting for your parents. You were away somewhere, I don’t know where. But you came by the house to pick up some music. Do you remember now?”

“No.” He stirred cream into his coffee slowly.

“I was sitting in your family room minding my own business when you flew in like a whirlwind, like the Tasmanian Devil from the cartoons, you know?”

Sam smiled slightly. She beamed back at him.

“And when you spotted me, you asked if I liked Marilyn Manson. You grabbed a CD and did me the honor of playing a song. It was Sweet Dreams. You sang along to part of it, and then you were gone.”

“I really don’t remember that. But it sounds like something I’d do. Did you like the song?”

“No. Not really. It was too scary for me. I was still into pop tunes in those days. I wasn’t ready for a freak show.”

She laughed, and her laughter must have been contagious because Sam laughed too.

“Why did you ask me out to breakfast?” she blurted. She just had to know. After all, he didn’t seem to be at all interested in getting to know her.

Eyes averted he said, “Uh, well, I sort of promised my mother and your aunt that I’d meet you. And breakfast is safe. It gives us something to do. And if we don’t have anything to say to each other, it’s easy to end quickly.” He met her eyes briefly and gave her what looked like an apologetic smile.

His words killed the little flutter of anticipation building inside her. Now she understood. It was a pity call. He wasn’t interested in her, and was about to end their date. The sinking feeling in her chest told her she wasn’t ready to have it end so soon. “Oh. Okay. I see. Should we go, then?”

Owned by the Dom: Part Two
Sam Crescent
In Shelf
$5.99
Tweets by
sirenbookstrand