They say you can never be too rich or too thin. They lied. They also say you replace one addiction with another...a truth Kurt finds out when his wife Justine--diet-enraged and hostile--runs the kids off with her super strict dinner. Justine needs to be satiated, and it's not food she's looking for. Poor Kurt doesn't know if he should be excited or afraid...

A tempting tale of weight loss and discovering new ways of stress release.

WARNING: EXPLICIT SEX AND LANGUAGE for ADULTS only. 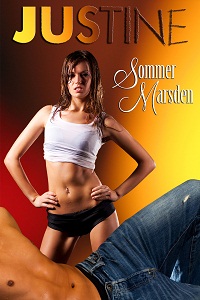 Her eyes seared him like a flame. He sat down and put his napkin politely in his lap. He let his mind wander for a moment. Maybe if he could tempt her, push her just a bit too far, she could see how out of control she’d gotten. How she had allowed weight and calories and energy burned to consume every waking minute for the last eight weeks.

“My mom always makes chocolate devil pie on Thursdays,” he said quietly. He pulled a hunk of chicken off the breast with his fork and shoved it into his mouth. No seasoning, no oil, nothing. Plain as a piece of cardboard. He forced himself to chew the bland meat and met her eyes. “One little piece wouldn’t kill you, you know.”

Her face looked nearly demonic the moment the comment left his mouth and Kurt had to gulp to force the masticated poultry down his throat.

“I mean, look at you,” he hurried forward, trying to repair the damage before she pounced. “Your arms are cut, your stomach is gone. Hell, Justine, I could bounce a quarter off your ass.” He swept his hand hesitantly along the firm jut of her shoulders, down her arm. “You look amazing.”

Justine growled. Actually growled! And pushed back her chair, rising in one predatory motion. Kurt tried to backpedal but the chair stuck along the hardwood floor and he remained pinned and helpless at the table. “You think I don’t know I look good?” she grunted and pulled briskly at the chair, wrenching him away from his dinner plate. “Don’t you understand that’s why I won’t stop? Won’t give up. Why I eat plain chicken and plain veggies, and plain everything these days?”

Her voice had become a roar, and Kurt had to concentrate brutally hard not to flinch. He would not cower from his wife like some kind of milquetoast sap. But in the honest part of himself he felt as if his heart was about to blow like a dry-rotted tire. What would she do? He truly believed her capable of brute force at this point. His sweet Justine had been replaced by a surly, diet-obsessed maniac. Rage seethed beneath her skin and her face twisted with the force of her anger.

She shoved the chair back harder, pinned him to his seat by settling her now-strong hands on his shoulders. “Don’t you think I’d give my left hand right about now for some fucking chocolate? Shit, Kurt! For a single chocolate chip, I’d sell my soul.”

“Shut up!” she snapped. And he did as ordered.

“I have all this...” she released him for a moment, her hands dancing and dipping in front of her chest, mimicking the words for a feeling she couldn’t describe. It was all coming out now, he could see. All the things she had suppressed and ignored were rushing out of her like infection seeping from a wound. “I need an outlet!” She spat the words out. “I need a diversion because I will be fucked blue if I will give up on this now. I like the way I look. Like what I’m accomplishing. I just don’t...” she trailed off. Her anger coming down a notch or two but still flickering over her delicate features.

“Like yourself,” he said. It was a statement not a question.

Her eyes found his and he saw two distinct emotions warring there—her ever-present anger, and a plea for help. Rage and vulnerability sharing space in a wife he loved. Again he traced her muscled arms with his fingers. He brought his voice lower, almost a whisper. “I don’t know what to do for you. What can I do?”

She seemed to think it over for a moment and then a feral smile stained her face. “Get upstairs,” she said, her voice low and controlled. But just barely. “You’ve got the thought of chocolate stuck in my head and I have to get rid of it. I need a distraction. And since this is all your fault, you’re going to help me out.”

Kurt felt warring emotions of his own. Fear and excitement. They writhed together deep in his belly like battling serpents. He rose and took the steps slowly. He wasn’t sure of his fate once he reached the top.

Lions and Tigers and Snares (MM)
Vincent Diamond
In Shelf
$0.00
Tweets by
sirenbookstrand