Released on the fifth anniversary of Hurricane Katrina, Katrina: A Freight Train Screamin’ by Cary Black, reports on Hurricane Katrina through the eyes of the people of the Gulf Coast who experienced her. The book contains extensive interviews from evacuees, residents, disaster aid workers, and a host of other folks affected by Katrina and her aftermath.

There has been much conflicting information in the media about the disaster. This book is being written to convey the stories and impact the disaster had on those folks who experienced her wrath first hand. Tales of Katrina: A Freight Train Screamin’ is being written to try to come to terms with much of the misrepresentation and misinformation regarding the impact of the hurricane, the response, the culture, and the effects on the people.

The book attempts to shed light on the magnitude of the disaster, in light of the heroes, survivors, relief workers, and victims. It speaks to the majesty of the human spirit that can emerge in all during times of calamity.

About the Author:
Mr. Black has worked professionally as a scientist and engineer for over 20 years, currently employed at Duro-Last Roofing as the Quality Control/Research and Development Manager. He has also played music professionally and semi-professionally for over 30 years. He is an avid guitarist and keyboardist, and spends as much time as possible working with the band "No Regrets", a classic rock/original based band. Mr. Black is also the President of Red Owl Publications, LLC. 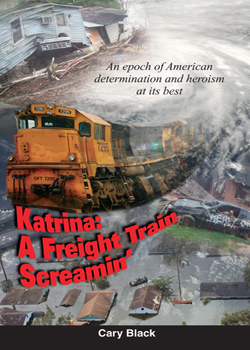