When a beautiful red-haired girl appears to him in a haunting dream, Keon is perplexed. Why does she arouse him so? Why does she persist with her promises, her teasing laughter? She seems so real, reminds him of someone from long ago.

Yet it is more than just a girl that Keon cannot understand. According to the calendar on his wall, he must be close to a hundred and fifty years old. Yet, when the girl from his dreams appears every month at the new and at the full moon, he feels so alive, so excited, so aroused... And when he travels to town, the girl at the local pub, the one he is attracted to in the Session Band, she looks surprisingly similar to the girl in his dreams. What’s real and what’s not he just can’t put his finger on.

In time, Keon comes to wonder if he is a ghost haunted by a ghost himself. But if that is correct, if he must come to grips with this fact, then why can’t he sleep like the others in the graveyard? And, why does the beautiful red-haired girl point to the ash grove behind his ancient home each time she disappears in a puff of smoke and laughter? 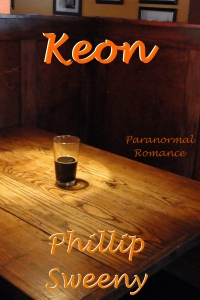 “I have to do it!” He yelled, giving in to his passion and desire. He braced himself by placing his hands on the arms of the chair and stopped rocking. He knew he could not win the battle. He blinked his eyes opening and closing them as fast as he could while he gave into his frustration. Slowly, he closed his eyes completely and held them tightly shut as the sparkles from looking into the bright sun flooded his brain.

He knew he had to bring up the image of her in his mind. He had to see her again, for she was the most beautiful girl he had ever seen. How could he shut out such a beautiful creature? But, who was she and why did she haunt him? Why could he not block her from his thoughts? He had no choice, yet he knew it would be the same, as it always had been, for a long, long time. He gritted his teeth in both anticipation and fear as the sparkles from the sun cleared.

It only took a moment and she appeared in front of him, shimmering to life like a desert mirage. One moment later, where once there had only been empty air, she stood close, but not quite within his reach. Yes, the girl with auburn red-hair the color of the sun at sunset stood in front of him. Her lips parted in a smile as her arms opened wide to him, exposing her breasts with naked pink nipples—naked pink nipples, growing longer with each step she took, bringing her closer to him.

Keon reached out. He wanted to touch her nipples and then run his fingers through her soft tresses, thick and glowing with the setting sun shining through as they fell soft as silk upon her shoulders. He looked at her body, thin to the point of being skinny, yet with skin which appeared smooth and soft. Her tongue appeared through her smile and she licked her upper lip while she beckoned for him with her finger. She stood a foot beyond his reach and cupped each of her breasts with her hands, holding her nipples out to him.