Kiss and Tell by Mimi Elise

It’s awards night on the television, and the gorgeous actor Jonathan Grant has received a nomination. Cassie’s friends make jokes about her and the supposed afternoon of passion she shared with him. Cassie recounts the only time she met Jonathan and the wondrous lovemaking they had together.

Lucy gets a job she adores; working in her favourite sweetshop. Her new boss, who she has a little crush on, offers her a little after hours training. What starts as some decadent sweet tasting turns into a decadent sex session... with some of Lucy’s favourite sweets joining in too.

Andrea is a mature student at the university and when it comes to the paper she needs to write, the task is to be creative in its presentation...but Andrea is no good with computers. She is put in touch with another student who offered to show her the ropes. This private lesson gave her more than she bargained for...though it was well received.

At The Hotel by David Inverbrae

After having a bit of a rough time, Joy has been piecing her life back together. Currently working as an elf for Santa’s grotto, she gets more than peeved when Santa keeps making passes. But when the lecherous Santa is revealed to be a luscious Sandra, things turn around for joy and Santa’s grotto becomes a love nest. 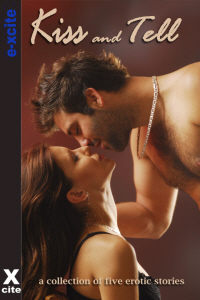 Five years before it had been a different story. He played the starring role in a Shakespeare production at a small theatre in my hometown and I was the cub reporter sent to interview him. He’d been hailed as the man most likely to succeed by his drama school, and was due to appear in an expensive BBC costume drama, which by all accounts involved him spending very little time in a costume of any kind. It would be his groundbreaking role, but when I met him he’d only played a few bit parts, such as a villain in The Bill and a patient with an unusual disease in Casualty.
We met in his dressing room. The moment I saw him, I knew he was movie star material. A little rough around the edges perhaps, dressed in jeans and a creased white shirt, with the beginnings of a five o’clock shadow on his chin. But he was also beautiful with vivid green eyes under perfectly arched dark brows. He was tall too. There’d be no standing on a box to reach the leading lady for him. He leaned back on the sofa, while I perched on the arm of the chair, finding it impossible to relax in the company of such perfection. I was all too aware of the sweater I’d thrown on that morning over a skirt that suddenly felt very short.
“I see my future as playing a selection of evil Englishmen in American films,” he said in answer to my question. His voice was deep, like thick, melted chocolate. I had a bit of a thing about baddies, and told him so.
“As long as they only kill other bad people,” I added for good measure. I stopped short of telling him that Alan Rickman in Die Hard was my favourite fantasy. I’d begun to realise that the divine Alan might be usurped.
“And they have to be kind to their lady loves, I suppose,” he said.
“Absolutely.”
“And give her mind-blowing sex.”
I didn’t know how to answer that other than with the affirmative. He looked me up and down, causing me to wriggle on the arm of my chair. My panties felt damp beneath me. I knew that the moment this man appeared on the big screen he’d be the catalyst for a million female orgasms. He wasn’t doing too badly with just me in the room.
“Mind-blowing sex is compulsory, especially for bad guys,” I said before I could stop myself. “They have a lot of naughtiness to make up for.”
“I’ll bear that in mind when I get my first role. Do you think I should start practising now?”
“It’s probably wise to be prepared. Even if you’re only going to be faking it.” I felt I had to get the conversation back on to reality and not the fantasies that were rushing through my head of us playing out every film sex scene I’d ever watched. Nine and a half weeks could easily become a year if only he’d give me the opportunity.
Feeling flustered, and realising I had no more questions for him, I stood up and started to say my goodbyes. He stood up too. Standing closer to me, he reached down and kissed my cheek.
“Goodbye, Cassie,” he said. “When I get my Oscar I’ll thank you for taking an interest in a nobody.” His lips moved to my mouth, where they rested lightly. I had the feeling he was testing me to see if I responded.
I tilted my head to kiss him back, pretending to myself that it would be a quick peck. It was all the encouragement he needed. His lips possessed mine, his tongue sliding into my partly open mouth while his arms encircled my waist. One hand slid down to my rear, pulling up my skirt and cupping one buttock, while his fingers slipped between my thighs, lifting me to him. His erection pressed against my belly. My groin ached with longing. I wasn’t known for being easy but for him I made an exception. After all, he’d hardly be bragging about me down at the pub with his mates. Why not enjoy one day of fantastic sex with him before all those starlets got their hands on him?
I don’t remember how we got out of our clothes; I just knew that a few minutes later we lay on the tiny sofa, our clothes strewn around the room where we’d frantically discarded them. His well-toned body covered mine, making me feel small and vulnerable. One hand caressed my breast, bringing it up to his mouth. He ran his tongue around my nipple, then took it all into his mouth, pulling the nipple outwards until it stood erect, and causing a sensation that ran all the way down to my sex. I scraped my nails lightly down his back to his buttocks, digging into the fleshy mounds as he increased the pressure on my breast. He really did have the nicest bum I’d ever been privileged to caress.