Marisol Milagros sees things. She does the impossible, for she is a witch from a long line of Puerto Rican brujas. The problem is that she wants nothing to do with magic and brujería. Choosing a career in science seemed like a good way to embrace reason, but her magic still calls to her. She knows she must pay attention to the spiritual part of her—the part that refuses to be quieted. Buddhism seems so logical to Marisol after having taken a few classes at the university. As much as she hates to admit it, another fascinating discovery related to the classes is a cool DJ who is a student by day: Ramon Rivas. He has a magic of his own that refuses to be quelled.

The discovery of her new path is threatened, as is her life, when she meets a new guru in town who calls himself Master Lama Ananda Rinpoche. The so-called Lama is a deranged killer who has become convinced that Marisol must become his tantric partner. DJ Ramon stands in the way of his victory, as does Marisol’s magic. “When the killer decides to take what he thinks is his, can Ramon and his power save her in time?” 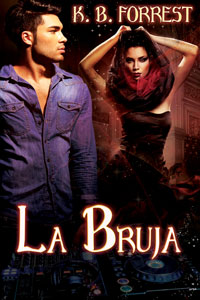 The stone walls dripped with moisture. The hall was hollowed out of the mountain itself, and was dark. It was lit only by the light of candles that dripped tallow, as the walls dripped with water. Uriah was the god and Marisol was the goddess herself. This was the true meaning of Tantra, he knew. This would be the ultimate union of cosmic elements. They, he and Marisol were the two tremendous forces, the yin and the yang that together made up the stuff of the universe. He was the sun and the sky, and Marisol was the moist earth, ready to receive him into the dark fecundity of her passive, yet yearning cave. He had chosen her well. They had to be complete opposites. Uriah knew that as he was the noblest and the most precious, Marisol was base and most common.

In the center of the cave floor there was a low bed made of rushes. It had no sheets, for it was meant only for sex. Oil, garlands, and perfumes had been placed in crystal bottles around the bed. In the shadows of the room, he saw the twinkling of eyes as the candlelight caught the moist eyes of the watchers.

Uriah stood near the bed, completely naked. The ritual called for him to avoid arousal for the first part of it, but he was unable to comply. This did not seem to void the ceremony, as the watchers remained silent. He was the god, after all. He could make the rules, he realized. He looked down at himself, feeling like a great bull ready for coitus, but he saw instead the beginning of a potbelly, under which a small penis surrounded by thin brown hair poked forth.

Looking into the gloom again, he saw Marisol entering the cave. She was naked, and her black hair spilled over her shoulders. She shyly held one arm and hand over her breasts, and the other hand covered her private part. She walked into the middle of the room and the watchers began to close in around them. They were arranged so that there was a ring of pairs of males and females. All of them were naked. Each pair functioned together. Each pair held items for worship. One pair held lamps of ghee oil, which were in the shape of a maiden with six arms. Each hand held a plate whereupon a cotton wick drenched in oil burned. Another pair held camphor-burning lamps in the shape of peacocks. Yet another pair held flowers, and another pair fans made of peacock feathers. The last pairs held yak tail fans and garlands respectively.

These pairs of men and women took turns worshipping Uriah and Marisol. The man of the pair worshipped Marisol, while the woman worshipped him. When this part of the ritual was over, the watchers waved sticks of incense of the most rare and precious sorts. They were then presented with gold cups of fine wine, which they drank.

Now the ritual turned to the most secret of all secrets: the union of the holy couple. They were to perform the most titillating of sexual acts, and all the while, he, the god, while absorbing the shakti, the power of the goddess, must never release his seed. In this way, his power would increase one-hundredfold. He would have to exhibit divine power. He would hold his seed as the yogis of old did. She would give unto him, and he would take from her. He drew a breath as he coached himself mentally. He knew he was well prepared, for he had read the necessary books. Usually, such secret acts had to be performed under the strict direction of a guru, but he had become the guru once he had ended the cycle for Lama Lhodrag Rinpoche. He was master unto himself.

First, he was going to have to sit in the lotus position. His shakti would have to mount him while he meditated, and take him in herself, while he sat unperturbed. She had been taught many tricks by which she could tighten her vagina in such a way as to heighten his pleasure to the point of ejaculation, but he would persist and never give up his holy seed.

He would stand and she would have to wrap her legs around him and strike him on the chest while she positioned his penis in her vagina and increased her friction. He had to stand balanced with one foot bent and set against his own thigh so that she could use it to support her vigorous gyrations.

The position called the “dagger” required that he thrust into her, and then withdraw. Then he would have to thrust again quite forcefully. The “boar’s thrust” would be from either side. He would then raise her legs above his head and thrust down. One leg would then be placed upon his shoulder, while the other leg should be forced outward. Her eyes would then roll around in pleasure. She would flail her arms, bite him, and push him deeper and deeper into her.

His entire body was tense and trembling as he reviewed the path he would have to take. He opened his eyes now. A woman approached Marisol with a pot of oil for the preparation of her place of worship. A tall man, the partner of that woman, approached him with a pot containing sandalwood oil laced with aphrodisiacs. This was a necessary part of the preparation, for it would prove that he was indeed the god able to both receive and absorb the woman, without losing even a drop of himself.

The man knelt on one knee and Uriah noticed how the man’s large penis hung down and jiggled slightly with the movement. The man dipped his hands into the pot, and reached for Uriah’s erect penis. He rubbed the oil first up and down, and then he massaged the opening slowly. Uriah’s mouth opened into a scream of primal passion as his semen sprayed up onto his heaving abdomen. His cock shook with a few small spasms before it slowly drooped down.

The man stepped back, as if in shock. All of the watchers stood stunned for what seemed an eternity, as Uriah’s cock shrunk back to a small organ that hung off to the left. Semen dripped from it. They began to walk away, grabbing garments from the darkened recesses of the room. He watched in horror as Marisol joined another naked man. He had rich, tousled black hair. His chest was powerful and his thighs muscled beautifully. He placed an arm that sported a strong bicep on Marisol’s shoulder in a proprietary gesture. As he turned with her in his arms, Uriah started to feel the beginnings of arousal again. The man’s hard buttocks and powerful thighs made his legs weak, while in his heart, black anger roiled. The man was Ramon. The thief was Ramon. The man who had taken everything that belonged to him.

Uriah fell to his knees weeping as he felt the silence of the cave closing in around him.