*Disclaimer* Explicit language and graphic sexual encounters The last day of school is anything but typical when eighteen year old Milana confesses her feelings to Mr. Capitani, the sexy Chancellor of her private school. One moment of bravery has Milana on her knees begging to please the insatiable Chancellor. 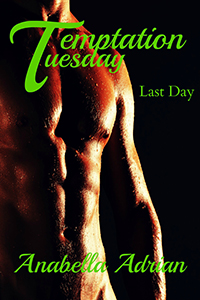 Despite the afternoon sunlight filtering in through the window, the room still seemed gloomy. Chancellor Capitani motioned toward the narrow chair directly in front of him. He sat behind the huge desk, a grand piece of furniture fit for the Chancellor of the prominent school. Any other man would look slight and insignificant behind such a desk. Not Victor Capitani. His presence was entirely undiminished. Licking her dry lips, Milana took him in. Mr. Capitani kept his shirt sleeves pushed up with his top collar buttons open, showing a small bit of tanned, hairless flesh. A navy vest was worn over his shirt, and hung neatly on the back of his chair was his dark suit jacket. His black eyes darted up from his papers. “Miss Moreno, shouldn’t you be in class?”

Milana’s cheeks reddened with heat as she struggled with the temptation to flee, but a spark of purpose forced her on. “No, Mr. Capitani. I’m leaving school today, you see.” Chewing on her lip, Milana wondered how she should broach the subject.

“Oh? Why are you here?” He had given her brief glances and the occasional courteous nod before, but for the first time the Chancellor was genuinely noticing her.

“You said that, Miss Moreno,” he said with a slight raise of an eyebrow. He placed his pen down and propped his chin on his hands.

She flustered under his intense stare. “Well, you see, the…the thing is…” She licked her dry lips. “I well, I would like for you to umm… to have sex with me,” she spilled the words out in an embarrassed whisper.