Last Kiss of the Clan Dancer

In this mystical world, a sinister leader has taken over and threatens to destroy all that is beautiful, colorful, and wild. Lars, a captain in Hareth's army, rediscovers what it means to be free when he comes across his lost love during a city wide raid. Rajiid, the woman from his youth, turns up in a tenement house, and he is forced by duty to turn her over to High Leader Hareth and her inevitable execution. This is a tale of redemption and regret. Find out if Lars can gather the courage to claim his destiny, or if his destiny will claim him. 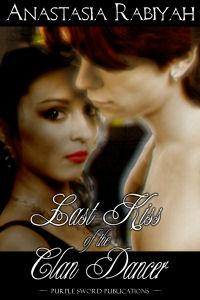 Last Kiss of the Clan Dancer

"...This is a sad tale, a reflection on many parts of the world. But it's also a hopeful tale as Rajiid shows what one person can do to change her world. This isn't for the faint of heart but it is an excellent read." -Dee Dailey, Awarded 5 Hearts, Reviewer for The Romance Studio, 5 Stars

He pushed himself down from the fence and approached her. "I'm Lars. Welcome to Caderwir Village. It's not much of a place." He nodded to the hills beyond. "But it's green and crops grow well here."

She tossed her hair over her shoulders and nodded. "Far more green than where I was born." She grasped his hand and held it tight. "I'm called Rajiid. My people have come to dance and trade with yours." She giggled at him. "Do you like to dance?"

Heat flooded his cheeks. "I've never tried. Too busy watching the sheep or tending the fields for my parents."

"Mm." She walked in a circle, leading him by the hand. "I'm a clan dancer. I'll teach you to dance if you want to learn."

His attention strayed to her round, ripe breasts exposed above her dress and pushed up by the laced corset she wore. He blushed worse and tried to keep his eyes on hers. They were dark brown and searching him as well. "I couldn't try it in front of anyone. They'd all laugh at me. Men in Caderwir don't dance."

Her grin turned sideways. She nodded at the hills. "If you would show me the wilds, I would show you how to dance so well that no one will laugh at you. Even the men would stand back in awe."

He whistled a signal to stay to the dog. Then Lars and Rajiid walked hand in hand along the fence and away from the caravan and village. Her hand warmed his. He felt connected to something new and unexpected. As the high grass closed around them, he wondered what more they would do besides dance. He had only kissed a girl once, and it was a hurried affair behind her roundhouse. She had married someone else seven days later, so he knew he had meant nothing to her. The thought of kissing Rajiid made him anxious and nervous.

"Do you have any brothers or sisters?" she asked. Her feet made whispering sounds in the grass. His boots crunched the grass in time with her steps.

"No. I'm the only child. It was a hard birth according to my mother. What about you?"

She laughed. "So many I sometimes lose count. My mother has three husbands and each demands a son, but she keeps having daughters. I am her seventh child."

"Three husbands?" He couldn't imagine how that would work out. "Do they fight?"

"Sometimes. They are all loyal to her. It's not usual for a woman to take so many. Two is enough, even one if he is headstrong." They paused beside a small stream. "I only want one."

He cleared his throat.

She faced him and took up his other hand. "Are you ready to learn?"

"No, but you're here, and I'm here. I don't think anyone can see us." He glanced around, uncomfortable.

She nodded. "Then we start with a basic dance. One you do when you find a woman you like." She winked at him before she ran her chest across his and stepped back. He knew he must have been bright red from her coming so close to his body like that.

"Think of animals. When they seek a mate, they touchlike this." She pulled his hands over her head and twisted. Her backside rubbed against his crotch. "Or this." She leaned her head back so that their cheeks touched. Then, before he could relax into the unexpected closeness and breathe in more of her alluring scent, she pulled away and released his hands.

Lars watched her dance around him, her fingers drawing symbols in the air. Her hips swayed, and each step she took she balanced on the balls of her feet. Rajiid was pure seduction. Each time she came close to him, she dragged her fingers over his exposed skin. First, his forearm. Then his neck. A caress to the cheek. A swipe of soft fingers over his lips.

He wanted to keep up with her. He followed and copied what she did although he was not nearly as graceful. He mirrored her daring touches. His fingers trailed across her forearm and up to her shoulder. He withdrew. She advanced.

Her voice hummed a smooth song that matched their movements. Her body blurred at times. Her touch grounded him. They danced until he became short of breath and backed away.

"A little. Sometimes, a little is enough."