Laugh in the Dark

How many times have the carts run through the funhouse at Conniesyaught Park? After one hundred years, Nick and May Connors and their four children figure plenty. It's what's inside the funhouse, however, that won't let them rest at night and keeps them looking over their shoulders during the day. After sitting abandoned and forlorn for over thirty years, they bought the old park and hotel on the lake with the good intentions of refurbishing it. Unfortunately, not everything or everyone in life wants to be restored and the family finds out the hard way when ghosts of the past make their presence known to the future, in an ominous and uninviting manner. 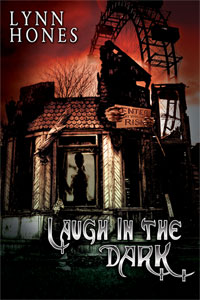 Laugh in the Dark

"The birds hate Arthur," Beatrice said. "Peter and I laugh when the birds try to bite him."

"I'll bite him, if he doesn't stop throwing rocks at 'em," Gina said.

"They're ugly," Arthur replied. "All they do is pick at the dead fish and crap all over."

"So what?" Gina's patience wore thin and she groaned. "Do you expect them to defrag your computer? They're fricken birds!" She rolled over and pushed a folded towel under her head. "This is going to be one hell of a long summer. No boyfriend, no girlfriends, nothing but kids to watch."

"You're not watching me!" Arthur threw another rock, then ran up the stairs and disappeared over the ridge.

Beatrice grabbed a shovel and pail to take to the edge of the water. There she sat piling mounds of wet, brown sand into her bucket to make a sandcastle. Gina enjoyed the peace and quiet, while she and Peter lay on the blanket and read. Later, she and Beatrice looked for shells and beach glass while their brother swam.

After a couple of hours, Beatrice sat on the shore and the waves came up and covered her legs. Her singing caught Gina's attention. The words were barely audible at first, but something didn't sound right. She raised her head to listen, and the lyrics became clearer.

"Came from California to start anew.

My mom fooled around, yes it's true.

My daddy took a hammer, yes he did.

He used it on my mommy, while I hid."

It made her skin crawl. Dumbfounded, Gina sat and leaned on her elbow. "Beatrice, where did you learn that song?"

"Gina!" Bea screamed. "There they are. There are my friends." She pointed up to the top and Gina quickly turned that way. On the edge of the hill stood two children, dressed as Peter had described.

Peter slowly moved toward Gina's blanket, spread out over the sand, and knelt next to her. Beatrice, on the other hand, moved closer to the incline and called up.

Speechless, Gina stared. Peter moved even closer and she put a protective arm around his shoulders.

The children didn't move. The wind blew their hair and clothing against their bodies, but they simply stared down, their faces as white as sheets.

Beatrice continued her greeting. "Do you want to go swimming with us? My sister will watch you. Go ask your mom."

Beatrice turned and looked at her sister and brother's faces. She stopped calling and moved closer to them. "What's the matter?" she asked in a whisper.

"Nothing, it's just that those kids are strange. I don't think you should play with them. If they ever come around and ask you, just say no."

The children continued staring down at them. Somewhat unnerved, Gina shivered.

A rush of wind whipped by and she turned her head. Black clouds filled the sky to the north.

"Gather everything up, guys. A storm's heading in." She stood and collected the books, snacks and sun block from her blanket and threw them into her bag, glancing occasionally at the strange kids.

They slowly made their way up the steps. Her sights on the children, Gina didn't want to blink lest they run and disappear. Once at the top, their odd behavior matched their attire.

"Where do you live?" Gina asked.

The tiny waifs simply stared at her.

Her impatience grew. "Go home. It's not safe to be here alone."

They continued to stand and gape at her.

"Did you hear me? You're on private property. Leave."

Beatrice ran up and put her arm around her sister's waist. "Don't be so mean to them, Gina." She smiled at the children. "Do you have a mommy and daddy?" Beatrice spoke in a concerned, saccharine-like voice.

The little girl raised her snow-white arm as if beckoning to them.

"Stop it." Gina grabbed Beatrice's shoulder. "Come with me."

Peter hung onto Gina's arm with a deathlike grip, but Beatrice trailed behind. Gina seized her hand and pulled her along.

Gina glanced back and they still stood there. "I'm calling the police!"