Legacy: The Mark of Merlin

Merlin’s descendants, some evil, some not, and some not even aware of their legacy, have survived to the modern times.

On the first Tuesday of October, the kind-hearted sixteen-year-old Ellen Anderson learns that she is one of Merlin’s descendants soon after her legal guardians, her brother Michael and sister-in-law Tanya, were killed in a tragic car accident.

As Ellen explores her legacy she eventually befriends Jessica and Karla Harman, sixteen-year-old twin sisters who are also Merlin’s descendants and powerful sorceresses. She then gets word that Jessica and Karla might not be as friendly as they seem. One or both might be hurting people with witchcraft. However, Ellen wants hard evidence of their guilt, and so she begins an investigation behind their backs to uncover the truth.

About the Author:
Gerald Pruett was born and raised in St. Louis. His interest in writing spans many years and is a contributor to Fan-Fiction on the internet. Continually striving to improve his writing, Gerald is currently working on his next project. Mr. Pruett’s first published book was A Crossed Reality. 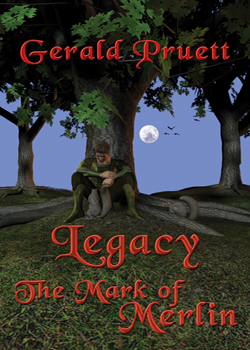 Legacy: The Mark of Merlin