Some legends live on. Wyatt Earp, Doc Holliday, Bat Masterson, Billy the Kid, all our legends that will more than likely never die.

But what happens to the ones that do die? The ones who fought for law and order, fighting for justice there own way and yet nobody seems to remember them? Here is a story about them. 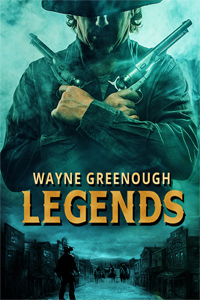 Gun shy, caused by his fighting during the Civil War, Buckeye Malone, the town’s newly appointed Mayor trembled his way to the telegraph office. Sam, the telegrapher, was sleeping soundly until Buckeye kicked him out of his chair. Sam mumbled and struggled to his feet.

“Wake up, you worthless idjit,” the Mayor shouted less than three inches away from Sam’s sour smelling yawn. “The bank’s been robbed. Get on that there clicking machine. Send for Gun Man.”

Sam, barely half awake, became angry from being jolted from his nap, shouted, “Simmer down, Buckeye, before that there ticker in your chest decides to give up the ghost. No one knows where Gun Man might be holed up. Or maybe at this moment he’s trailing some outlaws. So where exactly do I send the telegram?”

“Danged if I know. Stop your yawning and send it. Tell him we need help. He’ll come.”