Letters to the Dead: Things I Wish I'd Said

About the Author:
Ann Palmer began her TV career in Dallas, Texas in commercials and fashion modeling, which inspired her to take a chance on Hollywood. Torn between on camera performer and behind the scenes production, she did both for a number of years; including on camera in some 75 national commercials, many major films, including under contract to 20th Century Fox for Cleopatra, TV shows through the years, including 13 years on General Hospital. She was a producer for the Erwin-Wasey Ad Agency, a casting director, production assistant and worked all phases of pre and post production. Ann produced over 250 programs while at BHTV and continues now and then. She often tapes the places she visits for future productions. She is an ordained minister and also officiates at weddings. 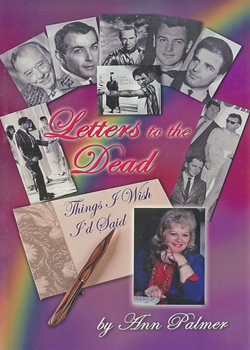 Letters to the Dead: Things I Wish I'd Said