Life in the World of Women

Taking in aspects of crime noir, erotica, romance and gritty social drama, Life in the World of Women confirms Jakubowski as one of Britain's most pungent and hardest-hitting writers. This is erotica for clever readers. 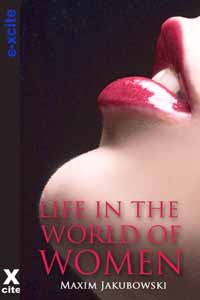 Life in the World of Women

He undressed her first. Item by item. Layer by layer. Her waistcoat. Her long flowing skirt of many colours. Her quaint lace-up boots. Her wedding and engagement rings. Kissed her throat, then her lips, then bit gently on her ear, nonchalantly licked her forehead and her smooth shoulders. Pressed his lips against her throat and held her tight against him. She wore a black bustier, garter belt and stockings.
‘How lovely. It’s been ages since I’ve seen stockings, old-fashioned but so nice, watching you like this is enough to turn anyone into a raving fetishist ...’
‘I thought you would like them.’
After rolling the warm silk down her endless legs and briefly tickling her funny-shaped toes, he got up from where he had been kneeling, drank in her sheer splendour and pulled down her final piece of underwear.
Her pubic hair was darker than he expected, all flattened curls against the marble expanse of her lower stomach. He kissed her bush with reverence, like a priest in holy homage.
He pulled back.
She was now nude.
The look in her eyes said a million things.
‘I want to know everything about you,’ he blurted out.
She turned round, took a few steps towards the window and closed the curtain.
‘It’s too bright,’ she said.
It was only 11.15 a.m. The sun shone outside. All that could be seen from the hotel room window was a car park.
Her arse was slightly square and also heart-shaped, a tad too large, but he wanted his hands all over her pale cheeks. Venus on a Tuesday, he distractedly thought. The straps of the garter belt had left a small indent at the top of her hips, outlining the majesty of the pelvis where her dark cunt beckoned.
‘Aren’t you getting undressed?’ she said.
He did, holding his stomach in as he pulled his trousers off. She looked him up and down.
He took her by the hand and pulled her towards the bed.
Later, when he would recall their first time together, the image of her body next to him with the filtered light that came through the curtains shadowing it delicately, would remind him of a postcard he had in his study of a sand dune, where a dip in the sand evoked a woman’s navel and a rise the gentle slope of her small breast.
After the initial, obligatory nervousness, he surprised himself by managing erection after erection anew and making love repeatedly, entering her three times before the time came to clean up, leave the room rented for half a day and drive back to Charing Cross station for her 6.15 p.m. train.
‘Oh, God,’ he says, entering her, feeling the ridged texture of her cunt walls against the taut skin of his cock.
‘Oh, Jeeeeezus,’ she says, as he slides, thrusts in and out of her, realising this is it, she has done it, she has a lover, she is an adulteress, and no longer fighting the pleasure coursing through her body.
‘Oh, Christ,’ he moans, his body convulsing as he comes inside her, and this is the first time, I want it to last for ever, for eternity, and opens his eyes and notices she had kept hers open all along, the first woman he remembers making love to who has done so. What a wonderful quirk, he thinks. It strikes him deep. It touches him intensely.
Both speechless for a long time after the initial shared orgasm; he finally disengaged from her, pulling his now limp and moist penis from the warmth of her vagina and kissed her lips with all the tenderness he could muster, even as he knew that neither gestures nor words could properly express the epiphany he had just experienced. The cover of the bed is rumpled; they had not even bothered pulling it down to uncover the sheets. He gets up, pours her a glass of wine.