Working on a gay cruise ship seemed like a dream come true for Isaac Yates. What could be better than being in the midst of a boatload of sexy men at sea, most of them looking for love? But Isaac’s dream becomes a nightmare when a horrifying reminder of a past he wanted to forget shows up and wants Isaac as much as ever. Plus Isaac’s found the perfect man, but how can this gorgeous stranger love him when he can’t even love himself?

Will the chance of love save Isaac from his past? 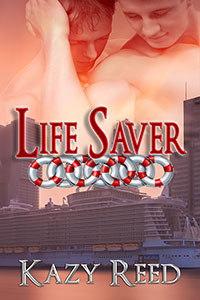 The alarm blared again. I realized no matter how many times I smacked the snooze button, it would keep on beeping every five minutes until I hauled my ass out of bed. I rubbed my hands over my face and peered at my alarm clock. When I saw I’d overslept by thirty minutes, I bolted to my feet.

“Hm?” mumbled the blanket-covered lump on the bed.

The sound startled me. Truthfully, I’d forgotten Alex had come home with me the night before. No wonder I was tired. The boy was unbelievably flexible, and he had the stamina of the Energizer bunny. Alex’s reputation as the village bicycle, however, rendered him okay for an occasional fuck, but nothing serious. He was irritated that I made him use a condom for oral sex, but no way was I taking such a stupid risk.

“Hm?” he repeated. Slowly, he uncovered his head and blinked at me. “What time is it?”

“Five?” he asked indignantly. “What type of job requires someone to function at five in the morning?”

I ran into the bathroom. A check in the mirror made me wince. My dark brown hair stuck up in all directions, and my green eyes were severely bloodshot. Rough stubble covered my chin and neck. Would my boss be able to tell that I’d been up all night, fucking Alex every which way to Sunday?

I turned on the water, and over the sound of the spray, I heard the apartment door close. I thanked God Alex had left with no drama. After the world’s quickest shower and shave, I threw on my duty uniform. I surveyed myself in the full-length mirror to make sure my khaki shorts and navy blue polo shirt weren’t completely wrinkled. With five minutes to spare, I grabbed my bags and hurried out the door.

The chief steward, Robert, stood with his clipboard, ticking names off the roster as the crew boarded. I pulled my hat down and tried to hide my yawn as I passed.

What should have been “No, sir,” sounded like “‘O ‘ir.” I yawned again and hitched my enormous duffle bag higher on my shoulder.

My boss rolled his eyes and checked my name off. He handed me a stack of papers. “You’re in C-12. Stow your shit and get some frigging coffee. We have four hours ‘til showtime, so I need you on your A game. Got it?”

After I got my clothes put away, I headed down to have breakfast with a few other bartenders I’d worked with before.

“Hey, baby,” said Leo, a muscular man with smooth, dark brown skin and gorgeous hazel eyes. He was a six-year veteran of the San Francisco to Honolulu run and had been my roommate for the past three years. We exchanged a one-armed man hug. “Glad we’re together again, Isaac. Lots of newbies this time around.”

“I’m stuck with a newbie,” mumbled Martin, a doe-eyed blond. He grimaced and added, “It’s awful. His cologne and mine just don’t mix.”

Leo chuckled. “None of the other guys want to room with you ‘cause all your makeup takes up the whole damn cabin.”

Martin narrowed his eyes and then produced flavored lip gloss from his pocket. “I will have you know this shit is what gets me the best tips.”