John W. Sloat’s latest book, Life Surprises, is a tribute to the discoveries and revelations that are part of every life. The book is a collection of seven short stories about the unexpected. These stories illustrate how quickly our lives can take unanticipated turns which lead us to discover surprising meaning in the most routine experiences.

A young boy’s neurosis produces an unexpected revelation.
An adolescent muses about a mysterious girl at the beach.
A feather on the beach leads to an unusual love affair.
A key found in an old car opens a strange quest.
A car radio keeps a driver safe from harm.
A detour makes possible a medical cure.
A pair of shoes combats racism.

These touching short stories, humorous and sometimes off-beat, completely captivate the reader and lead to surprising and unexpected resolutions, a la O. Henry. They remind us of the mystery at the heart of our daily existence, and of the fact that every moment can contain discoveries that may forever change our lives.

About the Author:
John W. Sloat, a former Presbyterian minister, served churches in Pennsylvania and Ohio for over 40 years. He holds a B.A. from Denison University, 1954; an M.Div. from Princeton Seminary, 1957; and a Th.M. from Pittsburgh Seminary, 1977. Previous books include Lord, Make Us One (non-fiction, 1986); The Other Half (fiction, 2001); Memories of My Misadventures (fiction, 2008); A Handbook For Heretics (non-fiction, second edition, 2009); and Moving Beyond the Christian Myth, (non-fiction, 2011). Several of his sermons have been included in Pulpit Digest, a national preaching journal. He has been married to Helen Burdick Sloat, a psychiatric nurse, for 57 years, and they have three children, eight grandchildren, and four great-grandchildren. He is a pianist/organist and plays the French horn. Retired since 1992, he is a scratch model builder, leads spirituality groups, and writes books. 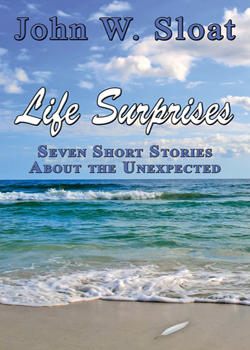