Lightning in a Bottle (MM)

Companion story to A Demon in Midwinter

Adam Johnson’s the heart, soul, and songwriter behind his band’s greatest hits ... if the term can be applied when they aren’t even famous yet. He’s never been a good front man or stage presence, though; he leaves that to Lee, who sings Adam’s words as if they’re poetry.

The problem is, they are. Every word Adam’s written is a love letter for his lead singer, though he’s never had the courage to say so.

But when a famous -- or infamous -- legendary rock star and scandalous sex demon drop by one of their shows, Adam’s forced to confront the possibility he just might get everything he wants -- the record deal and Lee’s heart -- if he can only find the words to ask.

Lightning in a Bottle (MM)

Lee leaned down from the couch. Put a hand on his shoulder. “You okay?”

“What? Yeah, sorry, thinking.” He waved a hand. Lee’s touch felt warm. Grounding. Like those big brown eyes, kind and concerned. But that was Lee, of course: taking care of everyone. A good leader. “Someone tie Zak to something before he starts levitating.”

“Justin Moore,” Zak said. “The New York Demon. The industry legend. At our show. I swear.”

Adam waited, but no actual question seemed to be forthcoming. Just his name. On Lee’s lips. While he sat on the floor with Lee’s hand on his shoulder.

Lee finished eventually, “You were great tonight. I mean, you always are, but tonight was ... you were ... we sounded, um, great. That energy. Because of you. I just. Wanted to say.” Awkward, tripping over words; Lee was never awkward. Adam gazed up at him, surprised, entranced.

Ian lit up a cigarette. Rye, still upside down, kicked him. “Those things’ll kill you.” Ian stuck out his tongue at her, because sometimes the members of the New Regency were five years old, but put it out in the closest empty beer can.

“Fine,” Zak said, “don’t believe me,” and came over and stole Ian’s new beer. Ian pointed a finger at him. A very small personal thundercloud appeared and began to rain on Zak’s head.

“Guys,” Lee said. Because he’d scooted closer and hadn’t moved back, the word brushed the top of Adam’s head, a warmth, a breath. “We are not wrecking the backstage room at the Gilman. For fuck’s sake.”

“Fine,” Ian said, and the rain went away. “So are we going out, or what? Afterparty? Getting laid? Come on, bro, that was a fucking amazing show, and it’s only two A.M., how’re we celebrating?”

“First we’re waiting for security to get us out of here, and then we’ll figure it out.” Lee glanced down at Adam again for no easily explicable reason. “And if you do get laid, don’t tell me, you’re still my kid brother, and that’s all kinds of no.”

“I remember when you tried to give me the sex talk before you’d ever even had sex with anyone,” Ian said. “It was hilarious. Good thing you’re awesome at faking being sexy on stage, ’cause you kinda suck in real life.”

Lee laughed -- everyone did -- but winced too, almost imperceptible. Adam, looking up at him, caught it. No one else seemed to.

“Just because I like to know someone before I get into bed with them,” Lee said, and sighed, and gave up; they all knew Ian. “Someone give me a beer.”

Adam, reaching up, said, “You don’t suck in real life,” and then cringed because words were exactly why he didn’t talk; but Lee’s fingers met his around the can and stayed put, surprised and happy. Lee’s eyes looked surprised and happy too.

“No. He’s wrong. You’re real. On stage, with audiences, you love them. Back here you look out for us. The way you care about people. That’s ...” He fumbled over an ending, wished for a pen and paper, an isolated tranquil spot to write thoughts down. He finished, hopelessly, “Real. You.”

“Man,” Lee said, “no wonder you don’t talk much, you’re kind of a dangerous weapon,” but his voice was quiet and his eyes were curious and wondering. “Guess I shouldn’t be surprised. I sing your lyrics. What were you thinking about? Before?” 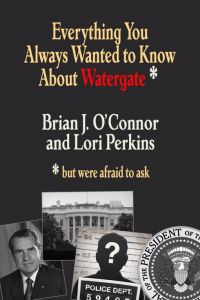 Everything You Always Wanted to Know about Watergate But Where Afraid to Ask
Brian J. O'Connor, Lori Perkins
In Shelf
$6.99