After her police officer husband is killed in the line of duty, Nicole Ainsworth struggles with the changes forced on her life. Her efforts to focus on her daughters and cope with her grief are kept off-balance by images of Steve, her deceased husband who seems to be trying to communicate with her. Eventually, Nicole finds that Steve isn't the only one watching over her, and discovers a second chance at happiness. 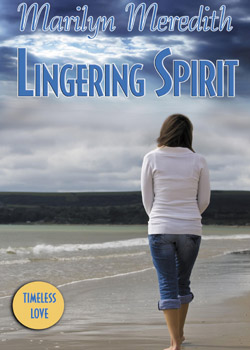 After her husband Steve has a dark foreboding of his own death, Nicole Ainsworth moves with him to a new community where Steve believes his police job will be safer. But he is wrong.

Soon after the move, he is killed while on duty. Despite the help and concern of Steve’s co-workers, Nicole is left to cope with her grief, a young daughter’s guilt, and the odd happenings that indicate to her that Steve’s spirit is still around.

To help her and her daughters adjust to the terrible loss, Nicole moves her family back to their hometown. But, even after she moves into a house there, events continue to happen to indicate Steve’s spirit still lingers. In addition, Nicole is annoyed by the efforts of David Callison, Steve’s former undercover partner, who is following her and hanging out on the street outside her home.

Will Nicole find love again? Will Steve’s spirit continue to remain in her new home?

Author Marilyn Meredith does an outstanding job as she tells a poignant story of love lost and love regained.