A teenage honor student from a good Catholic family - pregnant.

A barren young woman soured on relationships - unwilling to love.

One bullet, one week changes the lives of so many people. Discover which of life's "little flowers" bloom in the face of adversity and strengthen through hope and forgiveness. 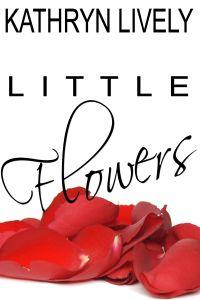 The winking blinds of the Mastersons' master bedroom were partially open, allowing the morning sunshine to slice into the room in long, slender fingers. Coming to rest on the bed, the light rays caressed the sleeping face of Doctor Neil Masterson, gently tapping at his eyelids and tempting him to wake. The alarm clock on the nightstand beside him had already failed at that task.

"Mmph." Neil tumbled onto his stomach, in the process tugging at the billowing bed comforter so it exposed his feet to the sun's warmth, which was magnified through the window glass as the February winter continued to prevail. He shifted for a cool spot in the bed, eyes closed only in vain now as he struggled for at least five more minutes of peace before having to rise and face the working world.

He smoothed his hands underneath his pillow and tucked his legs underneath the flap of the comforter, relishing the refuge they offered from the persistent sunlight. Had his bladder not woken up before him, Neil may easily have stolen ten more minutes of sleep.

Quite suddenly a liquid eye popped open for a blurred view of the alarm clock - the time 3:20 lit in digital red blinked back at him. Power outage, he realized.

As if on fire, Neil sprang from bed and snatched his watch from the highboy dresser across the room, sighing with tense relief on discovering he had only overslept twenty minutes. No big deal, he thought; there were no pressing appointments today, at least, nothing that could not wait, and in this day of precarious health reform, patients were used to waiting long periods of time as it was.

Neil jerked his head away from the bathroom mirror and glanced at the bed, noting his wife's section of mattress and pillow appeared unused. It took three seconds for him to remember that she was in Richmond keeping vigil for her sister, who was probably enduring her twenty-seventh consecutive hour of labor. If Carrie's last phone call to him was any indication, their pending nephew or niece was in no hurry to begin mortal life.

Neil had offered to knock off work for a few days and join Carrie and the boys for moral support, but the look on his wife's face at the mere suggestion of it negated the whole proposal. Those simple brown eyes of hers widened in shock, and her small lips twisted downward. A perfect imprint of his wife's face lingered in the back of Neil's mind. Whether it was shame or worry she would not say, though Neil was already aware of Carrie's sister's disdain for his line of work, despite the numerous occasions where he and Carrie attempted to explain fully what exactly it was that he did for a living. It always struck Neil as odd that Carrie seemed to have no problem voicing her pro-choice opinions at social gatherings and in eloquent, albeit sometimes anonymous, letters to the editor, but otherwise she was either apologetic or tight-lipped. What was it about blood relatives that turned his wife's resolve to jelly?

He was not a monster, Neil often assured his sister-in-law. He never held a gun to the heads of the various women, troubled or confident, seeking the aid of his practice. The choice was always ultimately theirs; he was only the doctor in the clinic offering the service.

Carrie's Aunt Barbara was probably going to be there, in Richmond, thought Neil, hunkered down in front of the picture window at the maternity ward, cooing at the babies and shaking her damn rosary like a rattle. Just as well he stayed in Williamsburg, he thought. He didn't need any of Barbara's disapproving stares today.

He nicked his chin with the last pull of the razor blade, and a small spot of blood surfaced and mingled with the last traces of shaving cream on his face. Neil cursed silently as he ran a damp washcloth over his face. If that were the only blood he saw today, he would consider his shift a good one.

Abortions were not among his favorite procedures to perform, but as long as they were legal in the state he had an obligation to offer his services to anyone who wanted it. It was not as if every day at work was, as Barbara called it, a "massacre of life in progress"; the clinic also offered other gynecological services, mainly for women without insurance and who were low on the annual income totem pole.

"Tell that to Barbara," he muttered to himself, shaking his head. She only saw a butcher when she looked at Neil, a butcher with a medical degree. His white coat might as well have been spotted dark red every day.

Padding downstairs into the kitchen, Neil noticed the sun's rays had followed him and strengthened as the morning minutes ticked away. A beautiful day, Neil decided, too beautiful to be wasting away under the dim ultraviolet lights of the clinic, surrounded by antiseptic white. It was too beautiful a day to watch girls just a few years older than his eleven-year-old son tread somberly in and out of the exam rooms, their heads lowered and lips quivering as if they, and not the growing buds inside them, were about to be terminated.

As Neil wrestled with the coffee machine, more inaudible curses escaped his breath. Seventeen years of leaving all household appliances in his wife's capable hands had left him at their mercy. A hot cup of espresso at the shop across the street from the clinic would have to suffice now, he thought, if he still wanted to be only twenty minutes late. He would call Carrie from the office during lunch for the latest update on his sister-in-law, and to tell her that he loved her.

He sighed heavily as he shrugged on his heavy wool coat, quick-stepping to the front door. He told Carrie that he loved her so many times it seemed automatic to him, like blinking an eye. Today, though ...a bitter feeling tugged at his brain. It seemed more urgent to do so, yet he couldn't dally any longer. Twenty-five minutes late, he grumbled to himself with a quick glance at his watch as he turned the knob.

The first bullet was fired as Neil stepped over the threshold; his hand still gripping the outside doorknob as he intended to pull it closed behind him. Instead the door opened wider as the force of the bullet tore into Neil's stomach and pushed him back inside. He backed into the closed closet door and caught his back on the knob before sliding to the floor, landing on a worn pair of pre-teenage cleats and clutching his abdomen.

What the hell happened, he thought. He heard nothing leaving the house, only a stiff buzzing sound filling his ears before impact. Nothing like a gunshot.

Warm blood spread across his gut as if he had spilled tomato juice on his shirt, just before someone thrust a pitchfork in his stomach to twirl his intestines like a strand of spaghetti, it hurt so much. He howled in pain and thought immediately of his family, distraught they were not around to help, yet relieved that they would be spared bullets themselves - this day or any other day. He did not need to see the gunman's face to know who was responsible, and there was certainly no mistake of motive, or that he was the target.

His head wavered from side to side, his breathing grew labored and his body tingled; he knew the feeling once before, when he and his wife donated a pint of blood at a clinic drive a month ago. Carrie told him that it was the closest she ever came to feeling near death.

He pushed his finger deeper into his gut to stifle the flow of blood, which was already forming a crust on his shirt. Quite unexpectedly a laugh bubbled up from his throat - this was a shirt he had ironed himself last night, without so much as a call to Richmond for a consultation. How he was looking forward to showing off to Carrie when she got back. Now look at me, he thought. Look at me...

His gaze floated upward to the chipped almond molding of the front door - a thick cotton spider web filled the cracks of one corner. No warning, he thought, not like on television. No endless weeks of perfunctory phone threats or being pelted with rotten vegetables as he left the building at night, no grotesque postcards of saline-fried fetuses tucked underneath his car windshield wipers bearing a block-printed YOU'RE NEXT notice.

His days as an abortion doctor were, well, until this moment, occasionally disturbed, with only the line of subdued protesters across the street from his building to nudge at his conscience. Could this have been one of them, he wondered. Could one of those people - one of Barbara's friends - brought himself or herself to set down a picket sign long enough to fire a gun?

So lost in thought and light-headed was Neil that he did not detect the presence of the figure in the long dark coat until he was standing practically over him, blocking the sunlight from the open door and introducing a sudden sense of quiet rage. The man wore a Baltimore Orioles baseball cap with the bill pulled over his eyes; he nearly had to tilt his head ninety degrees to look Neil in the face.

Neil eyed the tightened silencer on the muzzle of the man's gun. "Praised be the Lord, Jesus Christ," bellowed a deep bass with an accent dripping of Southern twang; it had to be disguised, Neil guessed, but why would he bother if he were planning to...

"No babies will die in this town today," the man proclaimed, and Neil wondered with the last of his conscious reasoning if his would-be assailant was going to tack on a whooping Rebel Yell after that. His next thought consisted of only two words: Oh, Jesus!

"None by your hands, anyway, you asshole." The man cocked the gun, aimed for Dr. Neil Masterson's puzzled face, and fired without blinking.