Lords of Oak and Holly

When her interpretation of a traditional holiday scene loses Maris the annual ice sculpting competition, her favorite season takes a turn toward dismal. The rent is due and her landlady won’t accept a fourth place ribbon. When the enigmatic Lord Brayce arrives with a last minute commission, Maris jumps at the chance. As her host’s icy exterior begins to melt away, Maris finds there is far more to him than meets the eye and his attentions leave her wishing this particular job could last forever.

When Brayce’s family arrives for the holiday, Maris is plunged head-over-heels into a world of secrets and an age-old conflict between brothers.

Can an ordinary girl survive at the center of a battle straight out of myth? And if her impossible suspicions are correct, what are the odds that Maris can win her prince? 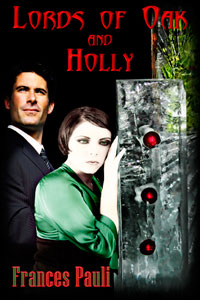 Lords of Oak and Holly

A throat cleared nearby. Maris started, opened her eyes and nearly slapped the hand away on reflex. A man stood opposite her, and his long fingers stroked the sculpture she’d spent so many hours shaping. She clenched her jaw against the urge to chastise. He might be a judge, or a potential patron, but he had a lot to learn about ice.

She followed the hand with her eyes, willed it to lift away from the lines she prayed didn’t blur at his attention. The heat from a finger—Maris cringed—could ruin her efforts in mere seconds.

“The epic battle.” His voice held no hint of his opinion on the piece. It stated fact only.

Maris tore her gaze from his disobedient hand. She followed a tailored, indigo suit sleeve to the man’s face, and found her words frozen in her throat. He had eyes that pinned you in place, clear blue, backed by an unnamed authority. She sensed little amusement when he smiled at her. His expression simply cracked.

He nodded toward the sculpture, and his finger pointed to the apex. Night black hair danced around his angular face with the gesture. “If I’m not mistaken,” he continued. “You’ve veered slightly from the traditional formula.”

“A small, artistic license.” Maris’ spine stiffened. As intimidating as the stranger looked, she felt compelled to defend her work. Years of school may have prepared her for criticism, but exposure hadn’t lessoned the sting of it. “The Summer Prince would typically be ascendant.” She pointed to indicate the sculpture’s deviance. “I’ve chosen to feature his adversary, in honor of the season.”

“Pardon?” She had to tilt her head back to meet his gaze. This time the smile held at least a trace of humor at the corners. His eyes flashed and held hers captive, frozen in a field of ice blue.

“I like it.” His smile cracked wider, one end curling as he nodded again. “Wonderful.”