Jenny Jones, successful California lawyer appears to have it all—highly respected and highly paid position, an almost unlimited professional career, and a small cadre of close friends. However, a nagging little voice pops into her mind from time to time.

The death of her mother, the arrival of a letter and the discovery of a bundle of unopened letters in her mother’s files reveal bits of family history and the nagging little voice becomes much louder. Deceased grandparents she knows nothing about, a cattle ranch in Arkansas and a ranch manager offer her a chance to follow that little voice to a new life.

Can she leave the California dream and an alternate lifestyle behind and embrace an entirely new life in rural Arkansas? 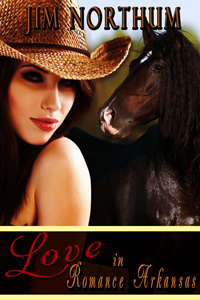 A boom on the deck awakened Jenny. She bolted upright as another boom rattled the windows. What the heck is going on, a drive by shooting out here? Just as she opened her door another rifle shot shattered the stillness. John was sitting at a bench peering through a rifle scope at something far across the field. “What on earth are you doing?”

Without even lifting his head, he replied, “I’m sending my regards to those coyotes down by the creek. Cover your ears,” and another shot rang out.

“Why are you shooting at them?”

“Ever seen a little calf with his nose bitten off as he was born? Some of those little calves might have grown up to be prize winning bulls instead of coyote bait. Been watching this pack awhile and have seen some dangerous signals. So, I’m taking a preemptive strike.”

“What kind of signals are you talking about?”

“For starters, they are in poor condition so they are hungry. They have been hanging around the calving field too much and getting a little bolder every day. It is just a matter of time until they happen onto a little calf and have an easy meal. Also their population seems to be increasing too fast.”

“I didn’t think coyotes did much damage. We have some in the foothills back home and they don’t bother anything.”

He replied, “As long as their numbers are reasonable, they don’t hurt anything. In fact, they are beneficial, they help keep rat, mouse and vole populations in check. However, when populations go up, competition for food becomes keener and some enterprising individuals and packs turn to other food sources – like our calves.”

“Did you get the one you shot at?”

He turned to see her standing on the deck in a skimpy night shirt, bare legged and no shoes. Her hair was tousled and tangled. No makeup marked her beautiful face. What a woman, even like this she is gorgeous, just a pretty as when she is all dressed up. Not many women can pull that off. “As much as I would like to continue to look at you, you might consider getting dressed.” With a start she looked down at herself and beat a hasty retreat.