Love on the Battlefield

Love on the Battlefield by Chrissie Bentley

Every year, the whole town comes together to celebrate the Civil War re-enactment, even if it’s a little scarce on the historical details! Up until now, she’s managed to wriggle out of the annual celebration, but this year’s she’s been conscripted to nurse the wounded Yankee soldiers. When teenage crush Gavin Black arrives on a stretcher, she has to get him out of his Civil War soldier costume in order to administer her special treatment. History is starting to look up.

Heat It Up by Shashauna P Thomas

Most people were put off buying the apartment because of its close proximity to the fire station, but for her, it was the perfect opportunity to indulge her ultimate fantasy. Firemen do it for her every time, but no other at the station gets her fired up more than strong, silent type Mark – in or out of his kit. When he offers to give her a private tour of the station, who is she to refuse? Things are about to get hot!

LaRhondra is always falling for the wrong guy, and Zak’s no different. He’s a member of their greatest rival band at the state championships and any inter-school “bonding” would make her a traitor in her band-mates’ eyes. Will LaRhondra be able to handle her crush, or will creating her own sweet music with the drummer in their band attire prove impossible to resist?

Thom has come to Ireland ostensibly for a second-cousin’s wedding, but in truth to escape a difficult relationship back home in the States. When he meets bridesmaid Geraldine, he finds a kindred spirit, who gives back as much as she takes. When she claims that she can still fit perfectly into her teen uniform, the challenge is laid; the only question is, is Thom man enough to keep up with this feisty Irish lass?

Sometimes there’s nothing sexier than a bit of role reversal, and that’s exactly what she’s got planned for her beau. Donning the modern army uniform, this self-confessed tomboy is more than ready to “wear the trousers” in the bedroom tonight; the only question is, will her boyfriend be willing to take his off?

These stories are also published in Ultimate Uniforms by Xcite Books 2010. 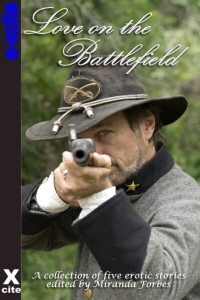 Love on the Battlefield

The field hospital was exactly what it sounds like. It was in a field, and it had “hospital” painted on a sign outside. Actually, I shouldn’t laugh. My fellow nurse, Miss Barnes, had gone to a lot of trouble to reconstruct what she imagined a Civil War era facility might look like – a bunch of surgical instruments from somebody’s tool box, a mountain of brown-looking bandages and half a dozen shop window dummies, daubed in scarlet and missing sundry limbs. When she described our charge as the day’s first “human” patient, I sincerely hoped she wouldn’t try for a little extra realism in that department. As it turned out, he was going to get a lot more realism than I’d ever expected.
His torso spattered with crimson gore, Gavin Black gazed up at me. ‘Am I going to live?’ he asked.
I smiled and, following Miss Barnes’ directions, mopped his fevered brow with a rag liberally soaked in alcohol. ‘We’ll do our best, soldier.’ I smiled as I said it, partially out of astonishment that I’d ever been press-ganged into this pantomime (I’d always managed to wriggle out of the annual invitation in the past), but also because I knew Gavin of old, and he was far from soldierly as you could imagine.
When I was in my early teens, he was the “hip dude” in the town’s only record store, the only one who knew what you were talking about when you asked for Elvis Costello and Iggy Pop records. He was the manager there now. I’d not been inside the place for years, but he was obviously doing well. I wondered if he was still considered hip by the latest wave of music-buying kids? Or whether he’d employed his own new dude to cater for the latest tastes?
I remembered other things. There’d been precious few interesting guys of my own age, and very few single ones, anywhere in town. Gavin, though he was probably six or seven years older than me, was one of the few who seemed even remotely attainable. For a time, I’d had quite the schoolgirl crush on him. I wondered if he ever realised?
The medics had already stripped off his uniform, leaving him clad in just an old vest and long-johns; I stepped back while Miss Barnes commenced encasing his entire lower torso in a spider’s web of dirty bandages (‘I soaked them in tea,’ she’d explained earlier. ‘It makes them look more authentically unsanitary’).
I watched her working; then, when she announced that she was urgently required at another of the hospitals, I took over. The crafty cow was probably off to the refreshments tent for the rest of the day. You couldn’t really blame her either. She was one of the motivating forces behind the entire re-enactment committee. If anyone deserved the day off, it was her.
I turned my attention to Gavin, lying grinning on the workbench. ‘Dying soldiers should maybe look a little more like they’re dying,’ I admonished him, drilling a finger into his abdomen. He gave an involuntary ‘ouch’, and I smiled. ‘Ouch. Yes, I’m sure a lot of them say that. So, how did you get “injured”? Just so I know where to put the most blood.’
‘I was trying to reload my musket. I caught a couple of balls in the stomach.’
Oh dear. What an unfortunate turn of phrase. But I resisted the temptation to deliver the first words that came to mind (‘I usually catch them in my mouth’), and pressed on. ‘So, the abdomen. Messy. Very messy.’ I grabbed a bottle from under the counter and uncorked it. ‘This might be cold. But you’re a brave soldier, you can handle it.’
Upending the bottle, a torrent of dark red liquid splashed across his bandages. ‘Cheap red wine. Adds an antiseptic air to the surgery, and looks absolutely lifelike. Doesn’t taste bad either.’
‘I’ll remember that,’ he laughed; and then, ‘you know, I was just remembering you as a kid. Do you still have all those records you used to buy?’

A Perfect Fit for Three (MFM)
Sydney Holiday
In Shelf
$1.99
Tweets by
sirenbookstrand