Madrigal: A Novel of Gaston Leroux's The Phantom of the Opera

Years earlier Erik faked his death and vowed the Phantom would never again haunt the Opera Garnier. But strange packages left by Anna, an unwanted Samaritan turned unlikely friend, cause him to desire the unattainablelove.

Battling the nobleman determined to lock him away, Erik must control his demons and tame a heart unexpectedly beating for two opposite women: Christine, who he longs to love, and Anna, the woman who saw beyond his bitter soul to the man beneath the mask.

In the midst of a brutal manhunt, can he be loved for himself or his he condemned to be The Phantom of the Opera? 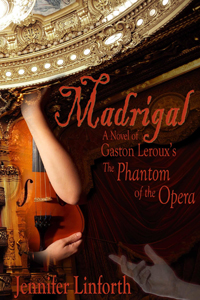 Madrigal: A Novel of Gaston Leroux's The Phantom of the Opera

"Ms. Linforth has written a love story sure to please Phantom fans old and new alike."

Jennifer Linforth's MADRIGAL combines mystery with love, albeit not a traditional romance story. She has created a fairly complex plot with interesting twists and changing viewpoints that keep the reader turning pages. The story, infused with some dramatic action sequences moves forward at a steady pace.

Linforth's descriptive ability shines, especially when she writes about the underbelly of the Opera Garnier where the book's most compelling scenes take place. Essentially, it's a confusing labyrinth of tunnels and mirrors that Erik can change at will to stay hidden. It's also fascinating to see what happens when Erik is confronted with two women for whom he has feelings. Erik's character is the most developed, as expected, showing the fine line between dark and light, madness and sanity. I look forward to reading ABENDLIED, the sequel to MADRIGAL.

Madrigal: A Novel of Gaston Leroux's Phantom of the Opera takes place four years after the events of the original novel. Although I have not read Leroux's novel, I can see how Madrigal captures the feel of the story very well. The classic novel aside, this book is a wonderful historical tale of life, love, and choices. However, the most impressive aspect that stands out to me is the writing. Ms. Linforth's prose is phenomenally beautiful and hauntingly breathtaking.

Madrigal, by Jennifer Linforth, captures the mystery and sensual essence of Gaston Leroux's classic, The Phantom of the Opera. We live again in the world of Erik, the masked phantom, and marvel at his complex character-disfigured but irresistible, evil yet loving. We walk in Christine's footsteps through the streets of glorious Paris. What a treat to revisit these characters and take up the tale where Leroux left off!

Reading Madrigal by Jennifer Linforth has been a wonderful experience. As a Phantom of the Opera lover, I've been able to read all the books based on this story and Ms. Linforth's work including plot, characters, and style makes this novel a gorgeous and unique creation.

Her main story is really original and thrilling from the very beginning to the last page. The action never looses its passion and suspense, guiding the reader through an intense journey which involves the entire book. We can submerge in the Phantom's life, feeling we are part of the story itself. She never forgets Erik belongs to Leroux and his personality and even his dialogues are impregnated with his original essence-a real treasure for Phantom readers.

The vision of Christine and her husband, Raoul, is full of surprises. We can never know if Christine regrets her choice for having chosen Raoul and even in the last chapters we feel her contradiction and see doubt in her eyes. This makes a perfect ending: we are yearning for it to continue.

Ms. Linforth's love for the Phantom legend can be felt in every page, in every word which makes her novel a wonderful experience and a delight to the senses.

~Sandra Andrs Belenguer, Historian and creator of the foremost Phantom of the Opera history and fan site on the net (www. ladyghost.com)

Many "sequels" to well-known classics fall short, lacking the spark of talent that blazed in the original. Jennifer Linforth's Madrigal is the exception to the rule, being the perfect continuation to the story that everyone knows and loves. Erik, known both as the Angel of Music and the Phantom of the Opera, has been hiding from the world and himself beneath the Paris Opera House, ever since Christine had chosen Raoul over him, and the terrible events of that night.

Jennifer Linforth has created a truly outstanding book with "Madrigal." This rich and evocative work was a sumptuous feast for any fan of The Phantom of the Opera. Watching Erik and Anna slowly come together was like savoring a fabulous piece of dark chocolate. I found myself reading this book just pages at a time, reluctant to end this feast too soon. For anyone who never understood Christine choosing the weak and bland Raoul over the complicated but truly intriguing Erik, this work will delight and reward. Anna is an amazing character, only someone as flawed as her, could see not the monster beneath the Opera House nor the musician behind the music but instead the man behind the mask. When the final page ended, I wiped away tears, happy because the story ended the way I felt it always should have, but also tears of sadness because the story was over, never to be experienced for the first time again.

An opening letter of explanation and then a heartfelt prologue weigh the opening of Madrigal as surely as does anchoring the work, so securely, to Leroux's Phantom of the Opera. Jennifer Linforth sets a demanding course, to follow in the wake of such a tale and such an author. And for this daring, in her Madrigal Linforth deserves most heartfelt congratulations.

She does, indeed, chart an unpredictable course. Erik, imagined dead, returns, lurking as before, in his dark sanctuary, torn between love and hate. Again the voice of an angel and the soul of a madman rage. It's sounds wonderful- dramatic - but Erik is a tortured soul. He is both afraid and fearfulcompassionate and dangerous. The contrasts weave about his character from beginning to end.

Description intrigues nearly as much as action. Linforth not only exhibits a passion for research, but she brings places to life. Just a glimpse at the inner workings of the Opera house bring it all to focus, without slowing the story: The cellars of the Garnier were tremendous as the opera itself. Totaling five, they supported the layout of the stage with a network of traps, hatches, winches, counterweights and revolving doors. Anna often found respite among the wheels and pulleys of the sub-stage level. She enjoyed wandering among the giant machinery

Madrigal takes place four years after the events of the original story, and while enough statements are dropped regarding the past that readers could understand what happened, knowing the history of the characters and events, whether it's having read Leroux's work, or having seen the play or film versions, helps to enhance the experience of this novel. Along with the return of familiar characters such as Christine, Raoul, and Madame Giry, several new ones are introduced, all who blend seamlessly with the old. Of the new, author Linforth makes a wonderful addition in Anna as an indomitable heroine, and in creating a despicable figure in the main antagonist. Though of all the characters, it is Erik who rightfully steals the show.

With this classic tale continued and given new life through author Linforth's lovely storytelling, Madrigal is a must read for Phantom fans. And if you're not a Phantom fan, give Madrigal a read and there's a good chance you'll become one.

Erik's blood coursed so hard the pulse pounded in his throat. He caught himself before he leaned too far out of his shadow. Caressing the velvet of the armchair, he imagined stroking her sensuous form, whispering his adoration into her ear, and proclaiming his love for her in ways he only dreamed.

Yes, I gave you it all, Christine. I would have lassoed the moon for you.

"And you gave nothing in return?" Anna said. "He loved you."

The memory of how he'd shunned Anna wrapped around his heart like a rope of thorns. The raw passion he felt for her tightened those binds until he swore his heart would puncture. He forced such passion away. He didn't want it. Not now. He clamped his teeth in an attempt to govern the thoughts tumbling drunkenly in his mind. The velvet shredded beneath his fingers.

Damn it, you little minx. Stay out of my mind.

Christine wandered the empty stage staring out across the seats. "There was nothing I could give. Least of all love."

Ridges plowed into Anna's brow. "Why?"

"He was horrifically deformed. He frightened me. I was put through so much horror."

"Then why did you continue with the lessons?" Anna demanded sharply. "If you knew he loved you and you couldn't give that in return, why torment him?"

"I wanted to know the music for I had never experienced anything like it. I deeply respected the Angel of Music and cared for him, but I could never truly love him. Not in the way he wanted. His affections were so powerfulthey frightened me." Christine shook her head. "A woman such as you could never comprehend the situation. He was a distorted soul, a madman. I couldn't be expected to look on that with love. No one could."

No one could? That? Respected? Rejected!

Erik tensed as he shook from head to toe. His hands crushed to his mask. He cursed his ugliness. Looking at the two women, he recognized the confusion Anna had mentioned. With all his being, he tried to control his demons. His inability to do so was not his fault. Man made him this way.

He turned his attention to the woman beside her. Erik leaned forward avoiding the urge to fold himself over the velvet railing and scream to the women below.

Anna, make her understand me.