The Furian and Frial have maintained peace for millennia, though they are opposites. The Furian worship Magmon, god of fire and passion. Their lands stretch from the southern volcanic ring to the temperate north. They are ruled by a royal family. The Frial worship the goddess Frilan, a goddess of ice. Predictably, their lands stretch from the polar north to the temperate zone. They are ruled by a god vessel called the Ician. They are as different as can be.

Once every cen-centenial, the alliance is renegotiated and a celebration ensues. There's just one little thing that has to happen first. The Ician is reborn for her people every generation. The He-Atal, Magmon's god vessel, only appears for the cen-centenial. He is conceived at Magmon's celebration, born in the Dragon God's fire, consumed by His hunger, taken into the temple to be trained to survive the burn... And finally, he is presented to the Ician with one job and one job only: seduce a frigid woman. 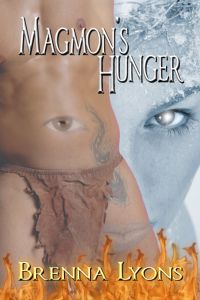 “There is one true way to celebrate Magmon’s Feast,” Jaygin breathed.

Elia laughed at her husband’s ploy. “As if it is so difficult to get me to warm your bed?”

He planted a hand on the pillar, nearly brushing her ear with his thumb. Jaygin leaned toward her, already hard. “I never mentioned a bed.”

Her question was lost in his kiss. Jaygin’s mouth was hot and hard against hers, a passionate man made all the more so by the holiday in question.

Elia didn’t protest it. Jaygin was a Furian prince, second in line for the throne. If sounds of their love play escaped the room, no one would dare interrupt them. Nor would the servants dare comment on it or pass rumors in the city about their play.

Not that sex outside the bedroom was particularly noteworthy in the capitol city of Aidalyn. The sexual games of young lords were scandalous, but Jaygin was no longer playing the games, and what he chose to do with his banded wife was fodder for no one’s amusement but their own.

They’d only been married a moon, and it wasn’t unusual for Jaygin to abandon his desk at midday for no better reason than to carry Elia to their bed. Even so, she’d never seen Jaygin like this. He’d always been a patient lover, slow in teaching her the love arts. He’d always treated her like spun glass that was to be handled with care.

There was nothing careful in what he was hinting...and she loved it. Perhaps the holiday was affecting her, as well.

Jaygin pulled at his clothes, peeling off his tunic and loosening his trousers. She unfastened her bed dress and dropped it on the growing pile, her breathing going ragged at the thought of making love in her sitting room. Jaygin’s gaze raked over her body, and he buried his face in her throat, nipping at her, leaving love bites that tingled and throbbed in time with her hammering heart.

Elia closed her eyes, tunneling her fingers in his hair. Jaygin nibbled his way up her throat to her mouth, parting her lips for another searing kiss.

Searing... By Magmon, she was hot. Her skin burned everywhere Jaygin touched her.

It is the summer heat. Magmon’s feast was held at the height of the season.

Her body burned in other ways, coming to life for him. Jaygin moaned, lifted her, and thrust inside.

Elia screamed in pleasure, full of his cock, branded by his potent need. Jaygin took her hard and fast, pressing her back into the pillar and lodging himself deep.

He roared in climax, driving her over in the force of his release inside her. She panted in delight, wrapped around him, and loosened her grip on his shoulders.

At her nod, Jaygin hardened inside her.