Blair Russo makes the biggest mistake of her life when she hires private detective Jack Darrow to help solve the brutal slayings of her sister and brother-in-law.

One unforgettable night in New York, Jack delivers a shocking message that turns Blair’s world upside down. Jack’s idea of fun is to play a deadly game, promising that people close to Blair will die in her hometown of Greenpointe, California—not now, but at some point in the future—all just for fun. More than a year passes before Blair receives a package from Jack—he’s in town and he’s ready to play. As Jack’s game of murder begins, the body count steadily rises.

Is Jack’s game really what it seems? What secrets and lies are hiding behind the handsome and charismatic Jack Darrow? Does someone else know about the game?

A deadly surprise is waiting where and when it is least suspected.

Someone else has malice in mind. 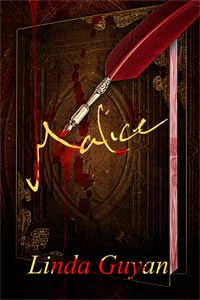 “Want me to kill him for you?”

The woman glanced at the man three tables away who had been blatantly staring at her. She turned back to her boyfriend and smiled sweetly.

“Not this time, but that’s really nice of you to offer.”

Neill Thomas gave her a wicked smile, the small chip on his front tooth easily apparent.

“Anything for you, Janie.”

Jane noticed the man continued to steal glances. Her mind strayed where it often did when she allowed herself to take in the people around her.

Who are you? Are you a killer like me? I know I’m not the only one.

Jane sipped the cold ale in the glass mug and soaked up her surroundings.

It was a frosty night under a full moon at London’s popular Bleeding Heart Tavern, and the ale was keeping them warm. They sat in the courtyard. A long string of twinkling white Christmas lights that had been draped in a zigzag pattern hovered above them. Even the potted plants were decorated with colorful lights. Behind Neill, she could see the large, gaily decorated evergreen wreath on the front door of the pub. Faint tones of Christmas carols whispered in the air even above the din of noise and drunken laughter on the patio. Church bells clanged nearby.

Jane Kelly wasn’t one for sentiment, but she loved Christmas. Especially here. She wrapped her long, red wool scarf around her neck to stave off the frigid air.

There’s nothing better than Christmas in London. It’s magical.

Jane focused her attention back to her boyfriend of ten years, twisting her sleek, chin-length black hair around her finger, her brown eyes alive with anticipation. “Did you say you’d do anything for me?”

Neill leaned in closer across the table and gave her a curious glare, his green eyes narrowing, his shoulder-length brown hair hanging loosely around his face. “You know I would. What did you have in mind?”

“Ready to play another murder game—just for fun?”

He grinned. “Aren’t all our murder games just for fun?”

Jane laughed while she fiddled with a black pen over her ever-present journal. “True!”

“Is this one different than the others?” he asked.

Neill Thomas knew she was a killer just like him—she had proven that numerous times in their kills together over the last ten years. It was snowing when they had met in a village southwest of London in nineteen eighty-five—each of them casing a kill. They were twenty-one, celebrating their shared December twentieth birthdays by spending a month in London. Since then, they had come here every year to celebrate, making it a ritual. Both adopted, they never discussed their family lives. The only thing relevant in their lives was now, not the past. It didn’t take long before Neill knew Jane Kelly intimately, not only physically but in every other way. Jane wasted no time in spelling out their relationship. They would never meet in each other’s homes or hometowns—only other cities, states, and countries. They would always use their pseudonyms. They would never communicate by mail, only phone. Later, she added on e-mail as an alternative. If forced to use the mail or e-mail, the note would be cryptic with clues known only to them. No one would ever be able to connect them as their real selves or to each other except under their fake identities and disguises in each location. It wasn’t safe for either of them any other way.

Neill Thomas and Jane Kelly were no ordinary couple.

After all these years, Neill still was amazed at how much alike they were.

Could she really be as evil as I am? Maybe more? Oh how I adore this woman! She’s like a female version of myself. What’s not to love?