Malika is a doll, or is she? Abusive caretaker Miss Jenkins is about to find out. Will she survive Malika’s mischievous personality, or will it drive her insane? 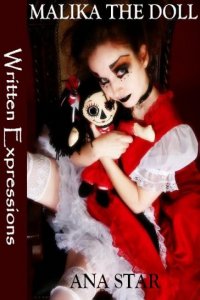 As the car approached the dark mansion, Nora Mannings was overwhelmed with joy. She was about to meet her aunt, her new appointed guardian. Miss Jenkins on the other hand, Nora’s caretaker, mumbled disapprovingly at the gloomy exterior of the mansion. Nora’s parents died and left their entire fortune to her and her aunt.

Miss Jenkins was contesting the Mannings family will. She tried to convince Nora of her peculiar family members and how she would be unhappy with these strangers. This only provoked Nora’s curiosity and anticipation for the fateful meeting.

Of course, Nora knew what Miss Jenkins had in store for her if she won custody and the inheritance. She was twelve years old but not stupid. She had overheard Miss Jenkins conversing on the phone. She was discussing sending Nora to a private Catholic college for girls in another country.

“I want to make sure Nora will be as far away as possible from me. Once I own everything, I won’t need her anymore. Just make sure she’s treated with the bare minimum of care. I don’t plan on paying much for her tuition. Make her work if you must, but don’t over work her. No one must know . . .” Miss Jenkins had turned away and continued her plotting over the phone.

In Nora's mind, there was no way she was staying with Miss Jenkins. She hoped her aunt would be like Nana said. The black car pulled onto the circular driveway. It stopped near a small fountain where a statue of a mermaid seemed to weep. Nora opened the car door before Miss Jenkins stopped the engine.