We all love a villain in a romantic break-up but what if there isn’t one? In fact what if everything seems just fine but not absolutely, weak-at your knees, mind-blowingly fabulous—should you stay or should you go? This is the dilemma facing Jessica Tiller who begins to realise that Ben, the man she thought was her manicorn (a sensitive, sexy and soulful man—in other words, for most people: imaginary), is in fact just an extremely nice bloke. And her past, as well as her long-time friend, David, are starting to push her in a whole new unexpectedly sexier direction.

When friends Stella and Minh’s blossoming romance and upcoming wedding makes commitment look pretty good, for Jessica it’s decision time. While Ben is busy working out with his gym buddy and resident office stunner, Elise, Jess turns to her best friend, happily married mother of two, Laura, who provides a wealth of experienced advice as does the gay sisterhood of Tiffany and Kristan. But when it comes to the crunch it’s up to Jessica to decide to what and to whom to commit. This humorous story is for those torn between the security of a totally inoffensive long-term relationship and the promise of the romance you once thought you’d have but you somehow lost. 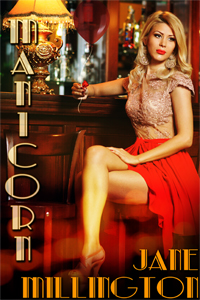 Cupcaking occurs when a couple decides to spend quality time at home together rather than going out.

No, surprisingly Jessica was not describing herself. Her mind was in fact offering up a seemingly unending number of adjectives to describe Elise. Apart from being show-stoppingly stunning, Elise exercised with Ben, Jess’s boyfriend. For the most part, Elise was someone to whom Jess was eternally grateful. She saved Jess from any pressure to join Ben in his sporting endeavours. Which was a good thing—for everyone. Jess had about as much flexibility as a dachshund and the speed of average eyebrow hair regrowth, sixty-two days, to regenerate. But today she was not feeling particularly grateful. Instead, she was asking herself if Elise really needed to look so darn peachy, not to mention perky, just to go running.

Jess leaned in the doorway of her and Ben’s white veneer townhouse, which she absolutely adored with its floor-to-ceiling windows and white bougainvillea in the front garden. She watched Elise warm up as they both waited for Ben to get changed into his running gear. Elise was touching her toes, then stretching up to the sky. As she touched the ground with her palms flat—Really, Jess thought, who did that?—Jess noticed that Elise’s cute little blue shorts rode up to reveal more of her tight buttocks than Jess really needed to see. And when she stretched up high, her white t-shirt lifted up to show a perfectly flat stomach. And Ben saw this every other day, Jess thought. That man must really, really love me. Jess smirked to herself while at the same time surreptitiously smoothing her shirt over her own small, but not at all toned, stomach.

“You just do those exercises to warm up?” Jess asked.

Elise smiled sweetly at Jess and started pulling one of her legs backward so her foot touched her perfect bottom. “And to warm down.”

“So, twice each run, then?” Jess tried to sound casual, wondering why it hadn’t occurred to her before to be completely cut up about the fact that Elise was an absolute babe who should not be exposing her ridiculously magnificent self to Ben three times a week.

“Mmmmmmm,” Elise said as she gave her other leg the same treatment.

Fabulous, Jess thought. “Well, just make sure you don’t overdo that stretching.” She laughed stupidly and felt her cheeks redden. She looked at her feet and wondered how often she had to look like a complete dolt before she learned to shut her big mouth.

“So, Jessica,” Elise said as she picked up her running weights and strapped them onto her wrists, “have we got drinks after work tomorrow?”

Jess, Ben, and Elise worked in the same recruitment firm, Allan Marcus, The Recruitment Professionals. Jess found it impossible not to adopt good posture when she heard that phrase. In fact, it was at Allan Marcus that Ben had met Elise. That’s right, Jess thought. Ben didn’t just see Elise every second day. They also worked together. Not that it had ever occurred to Jess to be bothered about that before. Perhaps she was just in shock from having to look at so many muscles and so much flesh in such a short amount of time. The fact that it was a female’s probably hadn’t helped, because Jess definitely did not have a problem looking at Ben’s flesh. Which was equally impressive. Just not so, well, girly.

“Oh?” Elise squinted at Jess. “I thought Ben had his supervisor assessment at five thirty PM?”

Nice, Jess thought, realising Elise knew more about Ben’s movements than she did. She hit her forehead. “Oh, of course. That’s right. The assessment. Well, I guess it’ll just be me, then.” Jess smiled broadly and silently congratulated herself once again on her ability to lie under pressure.

“Hey,” Ben said from behind her, gratifyingly stopping to kiss her on the back of the neck. Jess turned quickly and let his kiss travel to her mouth. She added a bit of tongue. Just to make a point. Ben pulled back sharply and looked at her. He didn’t like too much demonstrative passion in public.

“Back later,” he said, running down the front steps and quickly doing some mini versions of Elise’s stretches. Jess let her gaze travel all over his beautiful body. God, he was good to look at. She sneaked a look at Elise, who was doing a Bond girl impersonation of attaching her iPod to her shorts. “You ready?” Ben asked Elise. She nodded, making her ponytail swing jauntily from side to side, a sight that made Jess feel slightly ill. Jess wondered if she’d just grimaced on the outside or whether she’d successfully contained it.

“You okay?” Ben asked, frowning at her. Well, she supposed that answered her question.

Ben and Elise turned to run down the front path.

“Oh, Jess.” Ben turned and ran on the spot, giving Jess a not-to-be missed opportunity to admire his leg muscles in motion. “I forgot to tell you, I’ve got my assessment tomorrow...five thirty...”

Elise glanced at Jess with a puzzled expression.

Shit! Jess nodded, smiled, and waved happily. So happily she felt like hitting something. She took a deep breath as she watched them run off down the path, their feet hitting the pavement in perfect sync.

Nauseating, she thought before admonishing herself. What was wrong with her today? Insecurity normally wasn’t her thing. So what if her boyfriend was exercising with a completely sensational, ravishing and alluring hottie? The fact was, he was Jess’s boyfriend. And there was simply no reason—putting aside unexpected paranoia—for that to change.