Marvin, the Not Worthy

King Mortus grunted and groaned in an effort to think harder. He was close to giving up when an idea shattered his crown and scorched his never combed royal hair. Now he knew exactly what to do. He would become the ruler of that insignificant little world his people were always gabbing about. What was its name? Ah, yes, it was called Earth, a most unusual name for a planet. He would conquer Earth and make miserable slaves of its people. Yes, that is what he would do. 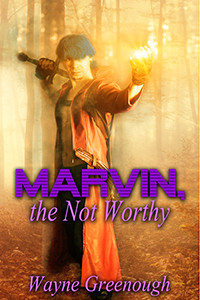 Marvin, the Not Worthy

As usual, on the first day of a new semester the students barged into my room, clamoring about mindlessly while shrieking eardrum destroying noise at one another.

Momentarily, they failed to notice I was among them. I sat at my desk with my right index finger poised an inch above the ‘Freeze the Student’s Motion and Noise Button.’ Their tiresome obnoxiousness went on for another minute until my patience ran out and I pressed it. All twelve hundred students faced front and became silent.

I smiled before speaking. “All of you please be seated and please remain quiet. I welcome all of you to ‘Story Telling 101.’ I trust you are all here due to the rumor that this class is the easiest one to take while attending this glorious academy you have wisely enrolled in. The rumor is correct. At the end of the semester, you will all receive the standard passing grade.

“I usually start the first day by reciting a story of immortality, something I’m sure all of us have wished for, and what might happen to us if during our said immortality we chose to walk some wrong paths.

“Let me emphasize that the story I’m about to tell you concerns real people and their names have not been changed. That said, here we go.”

In the dark mysterious star system located near the Milky Way Galaxy’s center, King Mortus, who is the evilest of all evil immortals is alone in his evil dark throne room. He sits sprawled in a most unkempt kingly manner on his hard gold and onyx throne. Upon staring at this little man we can describe him as being beady-eyed, skinny, sneer-faced, light of weight, and too lazy to bathe. He does indeed smell to a distance of ten feet. He’s robed with gold and silver clothing, which could stand a good washing. We must also mention that he wears his crown at such a bizarre angle it scrapes a sore spot on his elongated nose.

Now that this undesirable person has been sufficiently introduced, we shall tap into his walnut-sized brain to see what he is thinking. But remember that he is the evilest of all evil immortals.

“Gadzooks and double gadzooks. I am bored, bored, bored! I need excitement. Who among my subjects shall I punish for the next thousand centuries? No, that won’t do. I’ve already terrorized them beyond their endurance to where they’re so angry with me they’ve organized an attempt to overthrow my evil ways with their evil ways, though they realize that’s impossible, for I am the evilest of all evil immortals. Ah, yes. It is indeed a hard job, but somebody has to be the evilest of all evil and that is me.

“I have it. I need to do something to please my loyal subjects, make them crawl back to the status positions I allow them.”

As thinking was next to impossible for King Mortus he never did it. Nevertheless, much to his surprise, he found himself doing that very thing.

King Mortus grunted and groaned in an effort to think harder. He was close to giving up when an idea shattered his crown and scorched his royal never combed hair. Now he knew exactly what to do.