Mary Cavendish’s corset is already too tight. All the lovely Christmas food is tempting her, and that’s bad news for her dream of attracting a “knight on a white charger" — not that volunteering at the parish hospital is how she expects to meet him. Enter a mysterious Christmas Eve patient, who is none other than the famous Shakespearean actor Sir Wesley Samuel Darcy. Mary finds him arrogant, too forward... and maddeningly handsome.

When Mary learns Sir Wesley has been invited to spend Christmas with her family at Rougemont, she vows to resist the charming London rogue. Wesley thinks finding the perfect present for Miss Cavendish will tempt her — she’s not as prim as she pretends to be. Mary turned down six proposals last Season, and she’s not about to give in to a rake. But if Mary can’t resist the sugarplums, how can she resist the dashing Sir Wesley? 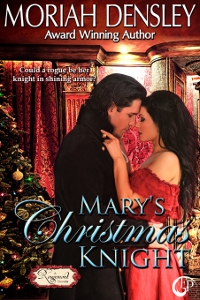 Ah, won't you buy my ivy? It's the loveliest I've seen.
Ah, won't you buy my holly? Oh you who love the green.
Do take a little branch of each, and on my knees I'll pray
That God will bless your Christmas and a happy New Year's Day.
~John Keegan, 1809-1849