The new Marshal was sent to investigate the Dugay Mining Company and arrest the lady outlaw known as Mask. This would be his toughest assignment seeing as how somebody drygulched him. A bullet in his back just might slow things up a bit. It might even change his mind. 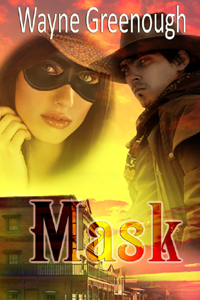 The six dismounted. In unison they separated until they stood four feet apart, became a straight line and took several steps forward.

Blake watched as Mask sized up the six. She whispered. “We’re in for a fight, Lawman.”

He whispered back, “Six to one aren’t good odds. You don’t have a spare gun under your hat do you?”