High school student Paul Coleman’s life is an ordinary one. His existence takes a turn for the extraordinary when he and his best friend, Rory, are attacked by a winged demon one day. The demon, which calls itself Hekla, possesses the power of sound, and kills Rory with its scream. Paul survives, but the force from the blast has left him mainly deaf.

A year later, Paul is out of school, working part-time, and is fearful of going deaf forever. Although he has learned sign language well, he wonders where his life will go.

All that changes when Montague (Monty) Trillian, also known as Master Fantastic, enters his life and requests his services as a sign language teacher for his daughter, Myrna.

Paul accepts, and soon finds out that Trillian is not just any magician, but an Elementalist, one capable of wielding the four elements of Earth with ease. He can also open portals to other worlds, and often does so, visiting those of earth, water, and fire.

Many adventures follow, and Paul and Myrna grow close, but Hekla returns and demands Myrna be given to her. It seems that Myrna is the product of a union between Monty and Hekla, and like all mothers, she desires to protect her own.

Now, Paul must do everything he can to save Myrna from being used for a fate far worse than death, and only the abilities of Master Fantastic can save them all—or can they? 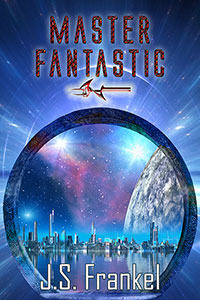 “Bro, wanna see a trick?” The voice was Rory Muldoon’s, high-pitched and insistent, but not annoying in the mosquito-buzzing-in-your-ear way. Not yet, anyway.

I fiddled with the lock, waited, and yes, there it was, the faint, familiar click which signaled its opening.

Coupled with his voice were the tones of the other students rushing by. Some high, some low, many insistent of the where-are-we-going-tonight variety, they ranged from bored to angry to petulant. Out of all those, Rory’s reigned supreme as he repeated the question. Inward sigh time, and it was a given that I’d have to respond.

It had to be another trick. Rory and his magic had alternately thrilled and bored the living hell out of me ever since we met in the first grade.

Had to admit, of all the people I’d ever seen perform—and I’d only seen a few—his abilities put him in mad skills territory. I knew it, he knew it, and he wanted everyone else to acknowledge it in the worst way.

“You’re the best around.”

He’d nod at himself in a yeah-I’m-the-man pseudo-tough kind of way, and while it was funny, no one at our institution of knowledge disagreed. Every year he performed his act on stage at the annual talent festivals. When we were small, everyone clapped and said, “Cool!”

When we got older, the comments of admiration changed to, “How did you do that?” Truthfully, no one could ever figure it out.

“A good magician never reveals his tricks,” Rory would always say. We all gave him his props because he knew his craft, but it would have been nice if he’d provided us with a clue, especially me, his best and only friend.

I’d learned a long time ago not to ask questions about the hows of it all. For me, it was just a matter of accepting the situation. My thoughts came back to the present with the sound of the locker next to me being slammed shut, and Rory repeated his question for the third time.

Okay, now the repetition was starting to piss me off. “Just a minute, bud,” I answered, somewhat impatiently. “I’m getting my books out. Gotta cram for the exam next week, y’know?”

After coming back from New Year’s vacation, school had turned nasty again in the sense we had to study. My Christmas break holidays—just ten days—had finished the day before yesterday. I still had a ton of homework to do and had to clean up around the house, all of which meant no parties.

Other kids got lucky as they had a lot more leeway in their personal lives or the smarts to do what they liked. Me, I had to cram just to make average grades, and it bit all the way.

Things were starting to look up, though. The bell had rung ten minutes ago which signaled our release from education. Even so, freedom had to be the most relative thing in the world. Today being Thursday, the previous six hours had felt more like a jail sentence than study. Tests in geometry, science, then chemistry—they all sucked.

As soon as I walked out of class, the whole grind of study would begin again at home. “Class is over,” our homeroom teacher intoned. “Remember, you have your tests next week, and those of you who need help can see me after…”

I zoned out the rest of the teacher’s speech. Time to make my escape! Yeah, let’s hear it for freedom—freedom! Freedom for the other kids meant partying hearty, swilling down the beer and toking up, something I never got into. I didn’t even drink. Yeah, call me straight-edge, but that’s how I rolled.

Knowing Rory, he’d probably shut himself up in his basement and practice doing tricks the entire forty-eight-hour grace period. I’d been to his house numerous times. We lived only a five-minute walk from each other, and his basement was filled with books on magic, levitation, bowls of sand and water, special boxes, rings, and all the paraphernalia magicians used in their acts.

Every time I went over, he showed me a new trick, but after a while it got sort of boring. Cool dude or not, Rory had a one-track mind.

As for me, the books called. I had to go home, go to my room and stay there. It gave me an excuse to get away from my uncle Frank, the man who’d been making my life miserable for a long time. After slinging my backpack over my shoulder, I did my best to leave the drab white walls of the school behind only to hear the teacher’s voice.

That was the voice of my teacher, Ms. Gardner. She’d come out to ruin my afternoon. Wonderful, my one chance of freedom shot to hell. What did she want now? Oh, wait, I already knew.

“I need to speak with you.”

She pointed to her room. I went. A file was open on her desk, and she sat down and looked at it intently. Then she pointed to some numbers. Short and middle-aged with a hatchet face and beady little eyes, Ms. Gardner tapped the file.

With an air of impending doom, I picked it up. Hard not to recoil a little from the C’s listed there with an A in English and a D in something else. I didn’t bother looking at the subject but figured it had to be important.

“Well, at least English is good,” I said, my voice hopeful. You had to be good at something.

She plucked the file from my grasp and dropped it on her desk. “Paul, you’re slipping in Geography and Science. You are aware of that, aren’t you?”