Penny volunteers as a bereavement caller at a local hospice where she runs into a whole new set of nutty buddies. Hospice workers ,under stress and subject to burnout, romp through the offices chased by a psychic medium who uncovers their life secrets with eerie accuracy. The hapless humans become entangled in the predictions they hear at their readings in Cassadaga, Florida, a real spiritualist town. All hell breaks loose, and the medium ends up stabbed through the heart with her largest most annoying knitting needle. Click, click. 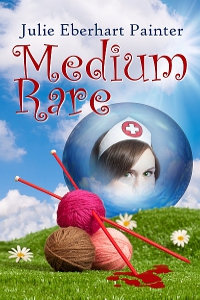 “I’ve got a problem, Andrea. It might be something that you can help me with.”

“I spoke with a very distraught widow who wants me to talk to the funeral director about what her husband is to wear at the viewing. God, I hate viewings—almost as much as burials at sea.”

“What’s the problem? He can wear anything she wants him to, can’t he?” Andrea unwrapped the salad Barney handed her and sat down at the table.

“It’s not that simple. The lady wants to lay him out in full scuba gear, including his fins. Not to mention his buoyancy control vest.”

“The fins? And the B.C.? He’s going to his Maker fully equipped, huh?”

“Yeah, and as if that isn’t bad enough, what with the tight wet suit and all, it turns out that his pride and joy in life were those French fins.”

“God won’t have any problem with it either way, but how are we gonna talk her into leaving the fins out of the ‘presentation’?” Barney shook his head. “I can see it now, the guy’s lying there on ice blue satin in a U.S. Diver’s blue and black wet suit, smile fixed on his face and the damned fins are sticking straight up out of the coffin thirty inches! It’s undignified.” Andrea let out a whoop. “Barney, he doesn’t have to be wearing them. When Cole Martin dives, he clutches them to his chest and leaps off the boat. He puts them on in the water. Penny explained it one time when she showed us their vacation pictures.”

“But he’s not going into the water. He’s going into heaven. The lady is adamant. Ashes and Water Funeral Home is distraught. Doesn’t anybody want a nice normal funeral anymore? Away from water stuff?”

“You’re getting upset over nothing,” Andrea soothed. “Just explain to the lady that the fins have to be at his side.”

“Oh, great. I’ll just call up Ashes and Waters and order, one corpse to go, fins on the side?”