Melody Haney has an angelic singing voice, but denies the gift after her son dies. Out of obligation, when she is asked to sing to hospitalized children she agrees. Accused of stealing drugs from the oncology unit she pushes away the one man who would stand by her.

Dr. Devon Siegal, pediatric oncologist, doesn’t believe in coincidences. Even when faced with evidence that could damn her, he continues to believe in Melody’s innocence. He has faith she will tell him everything and love will prevail. 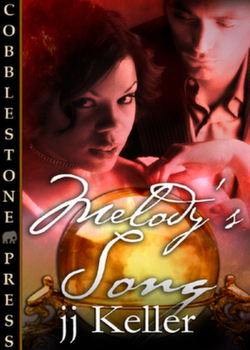 Melody was escorted to a common room with five children in wheelchairs scattered about. Older ladies in pink hovered near enough to help or wheel the children to their rooms, if they wanted. Melody had prepared seven songs. She met Jared’s glance, to make sure he understood how important he was. Her last song came from Peter Pan, “You Can Fly”.

Trying to make eye contact with each child, she noticed the man leaning against the door frame. She didn’t know how long he’d been standing there. His presence outstanding: not because of his height, topping off at five-eleven at the most, nor his unquestionable chest span as his green dress shirt pulled tight against his chest, rather due to his facial expression. He didn’t smile, but his face was soft and happy. She caught him watching her, staring.

His eye color unknown to her as his eyelids were half-shut, and the feather-like brown lashes, most females would give an appendage to be endowed with, stood out stark against his white skin. His smooth face was more pronounced in its roundness. His smile, relaxed with tiny dimples mere millimeters from the corners, pulled her into his serene web.

“According to my watch, it’s lunch time, so I’ll say good-bye. I want to thank all of you for listening and making me feel welcome. I hope you’ll have a nice afternoon.” Children clapped, if able, making Melody’s smile all the wider.

The aides and nurses wheeled the tiny patients to their rooms. Jared held back, his chair steady. Melody glanced at the man, his eyes, deep emerald green, brilliant as he moved inside the room, allowing the children to exit.

She leaned down in front of the child. “Did you like your serenade, Jared?”

He nodded his nearly hairless head. “May I have one more?”

The man with gem eyes stopped and talked to Nurse White. His legs were solid against the floor and his smile gone. His light brown, almost blond, hair was a little long for a man in the health industry. The sleeves of his shirt were rolled to three quarters, and his muscular forearm hairs sprung out in tight curls.

“How about if I hum to you while I help you to your room? You need your strength to get better. You need to eat and rest.” She rubbed her hand up and down his arm.

“One song, just for me?” A whine flew from his little mouth. He must be feeling better. Desperately ill children do not whine. It was the one time a whiney child was a good sign.

“Jared.” A smooth masculine hand rested on the boy’s shoulder.

“Hi, Doc…tor Devon.” Jared’s attention stuck on the man then dashed to Melody. “One more. A whole song.”

“Jared.” She shot her glance to Dr. Devon and returned to Jared. “I’ll help you to your room, and then I need to leave.”

“What is it you want, Jared?” he slowly asked, with a tilt to the end.

“Why won’t you sing one more song? Isn’t that what you’re paid to do?” Dr. Devon’s heavily accented voice shot through her like a needle sting.

“I believe it’s best for him to eat lunch and rest. A song will delay…”

“I’m not hungry.” Jared frowned with a pout.

“Haney.” She supplied, clasping her hands together.

“Ms. Haney, would it be possible for you to sing one more song to my patient, or do you need to get to the beauty salon or a charity luncheon?”

His voice, now snide, rocked her straight into fury. She looked down at her simple blue dress, quality but not rich, charity-function quality. Her jaws clinched together; she took a deep breath and smiled. The man ticked her off. Her anger was irrational and unexplainable. Maybe being in the cancer unit, the place where she lost her son, caused her to take it out on this man, but she couldn’t help herself.

“I’ll come to your room, Jared, and, if you’ve eaten a portion of your meal, I’ll sing a song just for you.” She caressed his cheek.

“Okay.” He glanced between her and Dr. Devon and wheeled with less energy than he’d exhibited earlier. Dr. Devon turned to watch him.

Melody believed Jared to be out of ear-shot and yanked Dr. Devon’s arm. Wheeling round, he wore a surprised expression on his face.

“Now, Dr. Devon, I’ll not be dictated to by you. I’m a volunteer. I’ll come and go as I please. If I have a previous commitment, not you or anyone else will manipulate me into altering my timetable. Sick children need a schedule, something they can depend on. Something they can control, because they don’t have any power over their health or how they feel. They aren’t able to manage where they go or if they’ll ever be able to feel the sun on their face while playing ball outside. They need a fixed plan and to keep to it.” Her breaths came out in little unrealistic pants. She had the capacity to swim under water for three solid minutes, so why was she out of breath. Melody caught her image in the mirror on the wall. Her face had flushed as hot as it felt.

“Is that clear, Dr. Devon?” She enunciated each vowel, drawing the breath from deep down in her stomach.

The tick in his jaw could have adequately shaken her Slim-Fast meal. Oh no, what had she done? Doctors were put on a high pedestal, and visitors certainly shouldn’t talk to them with such a tone.

“Ms. Haney, it is very clear. It was my understanding you were a staff member paid to sing to the children to boost their spirits. I apologize for thinking otherwise and for your selfishness. Have a good day.” He pried her hand off his arm.

Her hand had gripped his skin for at least two minutes, and at one point her bright pink fingernails dug into his flesh. The contrast from her light, coffee-tinted skin to his freckled, white skin drew his attention more than the pain caused by the crescent grooves she’d left behind.

Despite the anger he experienced as a result of her tone of voice and the tinges from the minor injury, his skin tingled with excitement. He had been unattached for nearly a year and swore to stay firmly and solidly single. Miss Melody Haney with her sexy angel-like voice and razor-blade tongue shook his platform.

Devon Siegal, pediatric oncologist, walked out the door in route to the nurse’s station before he changed his mind. His selfish ex-wife had left residue, which continued to upset his ego. She couldn’t have had an affair with another man; no she left him because she didn’t love him any longer. He could have taken the abandonment a lot easier if she’d declared she had found someone new. She walked out, leaving him alone, and he had become quite happy with his newfound introspection. He didn’t need a short, sharp-tongued, beautiful angel to do further damage.

Noting in charts and writing directions for treatment didn’t take his mind away from her. It took a good deal of willpower to pry her fingers off his arm instead of running his hand up her soft skin to cup her delicate chin. Her pixie nose had wrinkled as she’d caught sight of the grooves created by her nails. Her chocolate brown eyes had twinkled with humor when she’d sung the Peter Pan song. At moments, briefly, he spied a hint of sadness instead of a happy glimmer.

Damn, thirty more days until he finished his contract and he could enjoy the scents of a woman. He could resist a female for a few more days. As he’d walked past Jared’s room, her glorious voice rang through the halls. She looked up at him, grinned like a wicked witch, and loudly sang Beauty and the Beast.

Did he say selflessness or selfishness? Melody strained her mind to think about which word he’d used and knew he had said selfishness. Not that it’d made a difference on how she would think of him. Physicians were arrogant, pedestal-tipping people who postulated they could create a life, maintain a life, or destroy a life. They believed they had the power to manipulate health.

As he’d walked by the room, she’d tipped her nose into the air and sang Beauty and the Beast. Loud enough, the words had to have reached his ears. Maybe he’d get the message. Not that she was a beauty, but he certainly fit the beast role.