#MeToo - Essays About How and Why This Happened, What It Means and How to Make Sure it Never Happens Again

#MeToo: Essays About How and Why This Happened,

More than 16 million people had posted their #MeToo story and support against sexual harassment by mid-October as a reaction to Rose McGowan’s brave admission that she had allegedly been raped by Hollywood mogul Harvey Weinstein. A groundswell of reaction to and exposure of this sexual predation was unleashed that has spread throughout Europe and beyond. New revelations of unacceptable behavior in every industry break every day as people come forward in response to the viral #MeToo posts. Protests are scheduled such as the “Take back the Workplace” Hollywood march in November of 2017, and legislation is being drafted in New York and California to finally change the way things have been for far too long.

This is the turning point. Things are going to change.

This is a historic moment and it needs to be memorialized, passed around and passed on. Although social media is a fantastic means of igniting a fire, it needs to keep burning, like a torch.

So Riverdale Avenue Books, a woman-owned leading hybrid publisher, is putting its money, words and power, behind this and publishing this collection of 26 essays from people who understand want to make this change, and we, as a society, have got to figure out a way to drive that change forward.

So pass this book around. Share it with your sons, brothers, fathers, your daughters, sisters and mothers, your co-workers and friends. Read passages to them, if they won’t read it for themselves. Leave it on the desk of someone who should know better.

Help us make this movement more than a hashtag. 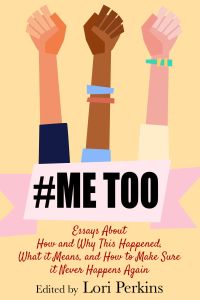 #MeToo - Essays About How and Why This Happened, What It Means and How to Make Sure it Never Happens Again

From After #MeToo by A M Carley

The #MeToo social media hashtag, first coined more than ten years ago by Tarana Burke, exploded in October 2017, after a boost from Alyssa Milano, in the wake of Harvey Weinstein’s fall. Its popularity demonstrates that lots of women — and some men — have experienced sexual harassment or assault, and are prepared to go public about it.

There’s no need to document any further the existence of sexism and male privilege in our lives. It’s pervasive. What we need now is to blow out the remaining parts of the systems that perpetuate it. How? I like to think there are a few things we can do.

If we can’t argue fairness or realism or progressive social policy or ethical behavior or justice, what can we do? We can build a better future. A future in which five-year-old girls, and boys, can recognize when physical contact feels unwelcome to them, give voice to their objection, and be supported for it.

A future in which ten-year-old girls can form independent opinions about the world around them — exploring history, economics, music, math, philosophy, writing, building, science, art, social policy, friendship. A future in which they can give voice to their thoughts, develop their skills — including physical skills — and be respected for them.

A future in which 18-year-old young women can cast their first votes based on their own values and their own research. A future in which, if a boy or man (or Stockholm Syndrome-afflicted woman) tries to influence any of those girls at any of those moments, the girls can shrug, perhaps scoff, calmly walk away, and move along, unfazed.

Many trauma survivors have emerged from their injuries because of the care and support that they receive from others. In community, our stories can be shared.

In addition, therapy retroactively can repair some or all of the injury for at least some trauma survivors. So those of us who came of age in the pervasive culture of sexism, only to meet its violent manifestations in alleyways, offices, cars, hotels, and everywhere else imaginable, may still sustain hope. Freedom from the internalized ghosts of that dying culture may still be attainable for us.

Each of us is enough.

Collectively we are enough.

Do What You Do Well

Whether that’s organizing a march on Washington, a postcard-writing campaign, or a fundraiser, go with your strengths. If your talents are in the arts, go out to the barn and put on a show, make a mural, or draft a manifesto. You get the idea. And if you’ve got the makings of a politician, see below.

Vote the Rascals Out

It goes without saying that each of us has a responsibility to vote for viable candidates, and, wherever possible, to provide additional support — through volunteering, lobbying, and contributing — to candidates campaigning for women’s rights. We can show up at the seats of government and influence the agenda in every way possible.