There is a real love boat, you know. And the first of its kind set sail in New York City in 1925. A first and lasting love happened on the deck of this fateful ship touring the Hudson River on a bright, sunny spring morning. Evelyn Morgan met and fell in love with her hero, tennis pro Emerson Cohen—sports rage of the decade, but she felt she never had a chance with the likes of him. After all, she was new money, and him, old money making a new name in the world. Emerson was also a lady’s man, among his other talents. Shy, quiet Evelyn simply knew she would never have a chance with him. However, this was the love boat! Could a lasting love really happen or was their encounter simply a ripple in the water of sexual desire? 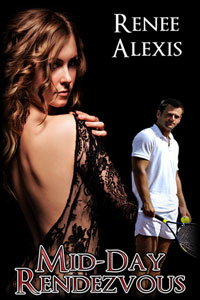 Can you guess how many heads turned over the comment? Enough to put attention on the newcomer. However, it wasn’t a bad thing because one of the turned heads belonged to Emerson. He laid his glass of cognac lightly on the table. He hadn’t seen me before then for some reason or the other, but our eyes locked. From then on, nothing mattered. It didn’t matter whether Daisy lowered on all fours under the table and sucked the life out of Wilton. I had Emerson. He nodded politely, produced a delicious little smile in praise of me voicing my preference on food choices within a sea filled with sharks. What a smile—enough for me to slide from my seat, if you know what I mean. What the heck, then Daisy and I would be face to face—though her man was down there with her. My man, as I affectionately spoke of Emerson, was nowhere near spreading his thighs for me. But wow, what a daydream.

Sure, I’d been on my knees before with a gentleman caller, in the beginning when I first met Daisy. She introduced me to the world of pleasing men in numerous ways. She’d show me her books, tell me of her grand expeditions under some young rich stud—and it included all the succulent details. When someone I liked came my way, I tried one of Daisy’s little tricks. I liked taking a man whole and drawing back with pouty lips. It was, in a word, appealing, I did it one time. But the more Emerson looked at me, moistening his lower lip with his tongue, the more I envisioned doing the same thing with him. I’d thought about it before, and actually imagined him maneuvering his cock in and out of me, a miniscule thought, because no actual handsome face stared back at me, just manufactured photographs of my tennis pro. I’d awaken from my daydream with my fingers inside my body and my chest heaving up and down, but I felt down because he wasn’t there. He’s here with me now, and who’ll know the difference?

With everyone engrossed in their chatter, I sat alone with my thoughts, a drink and a dazzling man across the table flirting with me. What could a girl to do in those circumstances? What would Daisy do? Since I wanted to be carefree and easy like her, I knew she’d go for it. Though I was a little too embarrassed to indulge in table games like her, I still wanted the experience, and Emerson did his best easing me into it. He’d nibble his shrimp like it was a woman’s tender folds, and then he’d dart his tongue across the succulent meat before devouring it. My nipples showed through the pink lace and I could do nothing about it. They had a mind of their own with each seduction Emerson went for. They drew tight and raw moving against my dress. When Emerson licked his fingers in slow drags after a thick, healthy swallow of meat, my throat tightened, chills covered my skin surface and in all the most delectable ways and places. He knew it, saw my every reaction while everyone sat around clueless, even Daisy. I excused her because her mind simply wasn’t on me at the time, nor mine truly on her.

Shrimp after shrimp became a game for Emerson, and with each one he ate, he made it look like a thorough delve into the deepest recesses of carnology. Unbeknown to all around him, this man was an expert at seducing women, and from afar. My panties became wet from his games. A simple tongue motion across his own full lips made me come in waves of heat so foreign to me. I liked it, like the idea of voyeurism, liked coming in public. Maybe I was more like Daisy. I glanced at her. She had no care in the world while eating her Red Snapper with one hand and the other—well-hidden beneath the cotton tablecloth. Wilton also ate his lunch single-handed.