Mister Goshevens is a self-made multi-millionaire who’s shrouded in mystery and judged purely on speculation. Remi was expecting nothing more than a fun holiday in New York with his friends, but their plans get changed when they discover Mister Goshevens is looking for something his fortune just can’t buy—love and happiness. Remi and his friends are sent a series of cryptic rhyming clues that lead them one step closer to Mister Goshevens. There can only be one winner, and Mister Goshevens decides who leaves his game, and when. The chosen man finally gets to meet Mister Goshevens and sample his charm and the euphoria he can inject. But for all that he gives, he expects something in return, and the stakes are high, as the winner doth learn. 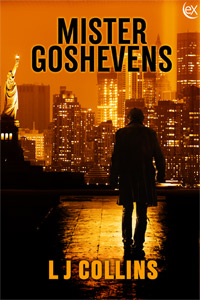 Even though he didn’t feel overly tired, Remi put himself to bed just before midnight, because he knew he had to be up early the following morning. He lay in bed tossing and turning while doing his best to clear his mind so he could get some sleep, but he had more than one reason to be restless. He was filled with a mixture of excitement and sadness. The following morning he’d be meeting up with two of his best friends, Jordan and Aaron, and jet-setting off to New York for a much welcome break, distraction and fun. But in the back of his mind, he wished his ex-partner, Eden, was still alive and that they were the ones jetting off to enjoy the holiday they’d always planned and dreamed of.

It seemed almost impossible that Eden had passed on nearly three years ago. The memory of him and the love he felt for him was still so fresh and raw in Remi’s heart and mind, and he felt bitter, sad and lonely.

Why did Eden have to be taken from him at such a young age? Why hadn’t he left for work at his usual time? Why did Eden have to be on the train that was the target of a terrorist attack? Why had he chosen to sit in the carriage where the bomb had exploded? Was there absolutely nothing the paramedics could have done to save him?

There were so many if’s, why’s and maybe’s, but none of them served any purpose, because none of them could bring Eden back. Fate had dealt them a fatal blow, and Remi had to deal with the consequences.

To try and change his mindset and distract himself from his torturous thoughts, Remi tried to imagine what might be awaiting them in New York. He was still a bit apprehensive about going on a ten-day holiday with Jordan and Aaron. Although they’d been close friends since college, they’d never spent more than a night out together or had the occasional weekend away. Ten days seemed like a long time to spend with two people he knew, but he didn’t know well enough to see if they’d grate on each other’s nerves or upset each other over a more extended period.

Remi was pretty relaxed about spending time with Jordan. He was laid back, responsible, and never got drunk, just a bit tipsy now and again, so he always kept an eye out for the others. He’d worked in corporate banking for most of his career, and he prided himself on being one of the few black men who’d been elevated to a senior management position at such a young age. But he’d studied hard, and worked even harder, to achieve what he’d earned, so he thoroughly deserved to be where he was.

Jordan was a grounded person and not the flirtatious or sleazy type. Despite continuous efforts to get together with a cute young West Indian guy who he’d carried the torch for since he’d met him at his gym a couple of years prior, he’d always been rejected. Based on the guys Jordan’s little West Indian beauty was seen with in the bars and clubs, it was obvious to Remi that Jordan’s fantasy man only liked older white men—very rich older white men, so Jordan didn’t have a lot going for him. Despite his constant advances and rejections, Jordan lived in the hope that one day his little cutie would change his taste in men and come running to Jordan when he had. Unfortunately for Jordan, Remi suspected he was going to have a very long wait.

Aaron, on the other hand, was entirely the opposite. He dropped out of college before he’d graduated, and it was only on account of his wide-boy image, smooth talking tongue, and bullshit promises that he’d managed to land himself a job as a trader with a stockbroker firm.

Aaron thrived on working in a fly by the seat of your pants environment which was full of adrenaline and pressure. He also enjoyed the mind enhancing perks that came with it even more. Fortunately for him, but more often than not, unfortunate for others, he earned more money than was healthy for a man of his mentality and maturity. It was wasted on somebody who put most of what he earned up his nose or spent it on champagne.

So as not to be undermined or mocked by his colleagues, Aaron maintained his act of being straight, and he was always seen to be a jack-the-lad when he was with his colleagues or out clubbing. He managed to get away with it with most people, but to a trained gay man’s eye, he showed signs of his true colours and sexuality. It only took the occasional slip of the wrist or an exaggerated facial expression to give him away. But that was the way Aaron lived his life, and Remi was in no position to criticise or judge him.

What concerned Remi most about spending ten days with Aaron in New York was that he was a loose cannon. Once the alcohol and whatever mind enhancing substances he’d taken had kicked in, he was invariably wild and unruly. He enjoyed nothing more than feeding his inflated ego by chasing men or getting them to chase him.

Remi couldn’t ever recall Aaron having had a long-term and stable relationship since he’d known him. He constantly flitted from one temporary fling or moment of lustful pleasure to another. He just wasn’t the settling down type of guy.

The more he thought about the holiday, the more Remi questioned whether they’d made the right decision to go, but it was too late to change anything. The flights had been booked, the hotel had been reserved, and he suspected Jordan would be disappointed if Remi didn’t go, given the whole purpose of the holiday was to celebrate Jordan’s thirtieth birthday.